7:00PM: Dinner at the Whale Watching
Following the Welcome Reception, the group will walk to Reykjavík Sailors, board Gullfoss, and head to the Faxafloi Bay. The boat ride will take 3-3.5 hours in total and will give us an amazing view of Reykjavík. Hopefully we will see dolphins and whales playing in the bay! There will be finger food served on board, and mid-tour the sailors will catch fresh fish from the ocean for us to taste. Reykjavík Sailors is approximately a ten minute walk from the Hotel Borg.

After the tour of Iceland’s capital city, we will have lunch at Nauthóll Restaurant, the Icelandic restaurant to receive the Swan environmental certification.

As per annual tradition, please join us for our Gala Dinner at Hotel Borg. During the Gala, Penn Law Dean Theodore Ruger will provide an update on the Law School. *Business attire or black tie.*

9:00AM: Sightseeing Tour outside of Reykjavík (7–8 hours). Sites include: 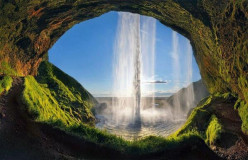 We will begin our trip along Iceland’s South Coast on the narrow strip of lush farmland that cuts between mountains, glaciers, and the vast Atlantic Ocean. The drive will be about 5–6 hours with a stop at Seljalandsfoss waterfall (Iceland’s most famous waterfall).

We will drive to the pier at Bakkafjara and will board a ferry that will take us to the Vestmannaeyjar (or the Westman Islands) in 30 minutes! Overnight stay in the islands.

Vestmannaeyjar, or the Westman Islands, are truly a wonder of nature. The youngest island of the Vestmannaeyjar celebrated its 50th anniversary in 2013, and the oldest one is close to 40,000 years old.

We will join a bus tour around Heimaey Island. We will visit the puffin nesting area in Storhofdi (known as the windiest place in Europe!), walk to the crater of the Eldfell volcano (known as Iceland’s Pompeii –– it last erupted in 1973!) and explore the flora of the new lava field.

We will take a ferry back to the mainland and a bus back to Reykjavík. The length of this trip is 12––14 hours.

Please contact Eyjólfur Ármannsson GL’02 or Kim Benenhaley with any questions regarding this year’s PLES Conference.