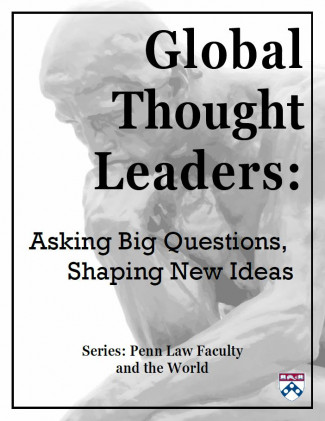 The “Global Thought Leaders” series shows what kind of a community we are and want to be. The University of Pennsylvania Carey Law School is a vibrant intellectual community where debate is central to its values. At the same time, difficult global questions challenge our own assumptions and interrogate our values, but that is all a critical part of learning. In the current polarizing environment around the world, there is much skepticism about the value, and values, of a global legal education.  The Law School’s leaders have historically made global engagement essential to its purpose. The importance of civil discourse and the centrality of open debate in understanding the truth is an inalienable part of the Law School’s global legal education. This series highlights global thought leaders who are pushing the boundaries of legal scholarship and practice.

We begin the series with Beth Simmons, Andrea Mitchell University Professor of Law, Political Science and Business Ethics who co-authors article, with Cosette Creamer, Benjamin E. Lippincott Chair in Political Economy and Assistant Professor of Political Science, University of Minnesota forthcoming in the January 2020 issue of the American Journal of International Law. The publication directly engages with debates and discussions over treaty body reform and provides a number of evidence-based policy recommendations and coincides with the UN Secretary General’s January 2020 submission to the General Assembly of his report on the treaty body strengthening process (see here ). The report will inform the General Assembly’s 2020 review of the treaty body system, which may result in a number of critical reforms.

2020
”Obligation Alleviation During the COVID-19 Crisis”
Cary Coglianese, Edward B. Shils Professor of Law and Professor of Political Science at the University of Pennsylvania; Director of the Penn Program on Regulation and Faculty Advisor to The Regulatory Review.