The University of Pennsylvania Carey Law School recently hosted an International Strategic Crisis Negotiation Exercise (ISCNE) in partnership with the U.S. Army War College’s Center for Strategic Leadership (CSL), with some participants attending in person and others virtually. 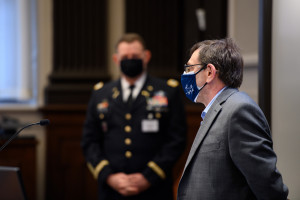 This exercise marked the third time the Law School has hosted an ISCNE. In 2019, Penn was the first law school to host an ISCNE, and last year, it became the first group to conduct an ISCNE remotely. The easing of some pandemic-related restrictions meant that this year’s event could be conducted as a hybrid event.

The exercise tasked the course’s 70 students, organized into nine teams each representing a different nation, to resolve a challenging international dispute in the South China Sea with diplomatic, informational, military, legal, and economic factors at play. Volunteer mentors assisted throughout the exercise and included former foreign service officers, current and former military officers, law firm partners and associates, and academics.

Senior Fellow at the Center for Ethics and the Rule of Law (CERL) Alexandra Meise, who has served as a mentor the past two years, explained the importance of the role of the South China Sea in both the ISCNE and the world.

“The South China Sea is an extremely important region for U.S. and global security strategy, particularly with regards to China’s use of soft and hard power,” said Meise. “It is also a region with a wealth of sea-based natural resources, some of the fastest-growing economies on the planet, and a myriad of national-level democratic governance struggles. By exploring these issues hands-on through the lens of the South China Sea problem, students learn how intersectional as well as intersectoral national security policy and diplomatic action can be.” 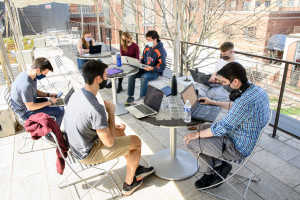 Contextual courses for the exercise were held throughout the spring semester with background lectures in South China Sea diplomacy and related topics. For the three-day exercise, three teams (Japan, India, and Brunei) participated in person, on campus, while the other six (USA, China, Philippines, Vietnam, Indonesia, and Malaysia) participated virtually on Zoom.

Course leaders were especially appreciative of the Law School staff and faculty who helped manage the logistics of the exercise, and Aaron McKenney noted that the hybrid arrangement added an element of reality to the exercise.

“This year’s ISCNE was unique in that students were faced with the added challenge of negotiating in different settings, with six teams operating virtually and three in-person,” said McKenney. “Mirroring the realistic scenario that real-world diplomats find themselves in today, with different country’s accessing the risk of COVID-19 differently, student country teams had to grapple with communicating and negotiating in-person and over video-chat. This allowed students to better understand and compare the costs and benefits of in-person and virtual communication both when working internally as a team and when conducting negotiations externally with other teams. This will serve them well as they prepare for negotiations and advocacy in the legal profession where the spatial and meeting medium factors are omnipresent in today’s age.”

One of the unique aspects of the ISCNE is that it isn’t designed solely for students interested in careers in national security or the government. Penn Philosophy PhD student and Army veteran Jesse Hamilton, who served as a mentor, recommends the course for all law students “looking for an intense learning experience,” and Meise emphasizes that it “teaches skills every professional can use in their careers.” 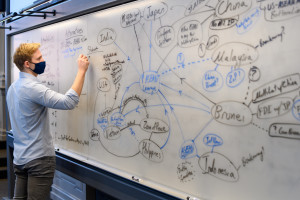 The course also acts as an eye-opener into how real-world military negotiations work.

“Some students come into the exercise with pre-conceived notions about how and when military force should be used or how easy it is for nations to reach formal agreements,” said Meise. “They get an awakening. I hope students come out of the course understanding that negotiations are not a zero-sum game. There are rarely definitive ‘winners’ and ‘losers’ – through compromise, it is possible for multiple parties to get something that they want even if they don’t get everything they want.”

“As a mentor, it’s gratifying to watch teams of relative strangers transform into a well-oiled negotiating machine in just a few days,” said Hamilton.

Michael Keene L’22 found the exercise “intellectually challenging,” fun, and useful for meeting fellow students, which had been challenging because of the pandemic.

“The opportunity to participate in the simulation really helped build my negotiating, teamwork, and strategic planning skills,” he said. “I would highly recommend that everyone take this course.”

This piece originally appeared on the Penn Law newsfeed.