This spring, six University of Pennsylvania Carey Law School students joined students from law schools around the world to participate in a weeklong virtual workshop hosted by Waseda Law School in Tokyo. The theme of this year’s workshop, “Same-Sex Marriage: Comparative Legal Issues,” not only brought together a number of leading gender and family law scholars from six countries, but also proved to be exceptionally timely. Just days after the program’s conclusion, a Japanese District Court reached a landmark decision ruling that the government’s failure to recognize same-sex marriages violates the Japanese constitution.

Throughout the week, professors from China, the United States, Japan, Taiwan, Germany, and Korea delivered lectures on same-sex marriage and the law in the countries where they live, work, and study. Professor of Law and History Serena Mayeri, whose research focuses on the intersections of gender, sexuality, and family law, presented her work, “Marriage (In)equality.”

Marissa Schwartz L’22 elected to participate when she saw that this year’s workshop topic was same-sex marriage – an area of the law in which Schwartz has developed an interest throughout her legal education.

“Last semester I had the opportunity to take the Bok course with Professor Tracy Robinson on Queer and LGBTQ issues in an international comparative lens, which was my first foray into both comparative law and LGBTQ legal issues, which is really interesting to me,” Schwartz said. “I was excited to study and be exposed to more ways that law impacts LGBTQ issues and marriage equality.”

For Trevor Kirby L’23, the Waseda Transnational Program (TNP) not only offered an exciting, non-traditional opportunity to learn more about LGBTQ law and policy, but it also presented a way to build community with LGBTQ law students and allies in the U.S. and across the globe. 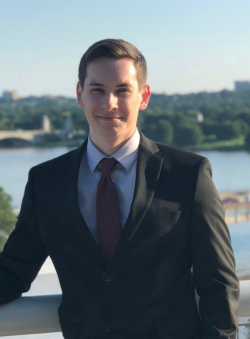 “As a gay law student, the LGBTQ student group on campus – Lambda Law – offered an incredible opportunity to build community amid a pandemic that fundamentally altered the 1L experience. Consequently, I knew that participating in the Waseda workshop would be both community-building and enlightening,” Kirby said. “Being able to reflect upon and compare my experiences and understanding of the US LGBTQ movement with similar movements in other parts of the world presented a unique opportunity.”

The Waseda TNP follows the format of international law conferences in that students serve as “delegates” from their respective countries. Over the course of the week, students collaborated with one another to create two presentations: one explaining the current status of marriage equality laws in their home country, and the other comparing and contrasting their country’s marriage equality laws with those of the other countries present.

One of the most interesting parts of the program to Schwartz was learning about the topic while simultaneously being put in the position of “representing” the United States as an “expert” on legal issues surrounding marriage equality. She also enjoyed collaborating with other law students who were able to teach one another as they worked together to create their presentations.

“I really hadn’t known much about this topic in different countries and what the current laws were,” said Schwartz. “It was eye-opening to learn about the different cultural and legal approaches to same-sex marriage LGBTQ issues more generally. Especially in this current time, it was cool to interact with other law students, to hear about their perspectives, and to learn about different structures of law.”

Having not previously considered a career in international law, Kirby reflected that engaging in comparative analysis of same-sex marriage laws emphasized the value of viewing domestic policy through an international lens.

“I benefited from wonderful U.S. and international teammates,” Kirby said. “It was both enriching and rewarding to see facets of your history in another LGBTQ movement as well as discuss critical differences with international colleagues. Having completed the workshop, there’s a vast spectrum of support for and opposition to present LGBTQ movements throughout the world. While some cultures have begun to also embrace same-sex marriage, others have gone even further than that of the United States. Analyzing those movements from international perspectives, exchanging stories and histories with other LGBTQ colleagues and allies, was one of the most impactful experiences I’ve had as a gay man.”

Both Kirby and Schwartz agreed that, though they would have loved the opportunity to travel to Tokyo to participate in the Waseda TNP in person, they valued that the program’s virtual setup still allowed them to have meaningful interactions with fellow law students and leading scholars of LGBTQ rights.

“I’m incredibly grateful to the Law School, Professor Mayeri, and my fellow teammates,” Kirby said. “It certainly was one of the hallmarks of my 1L year, and I hope that Penn Law continues to foster these kinds of international relationships, offering similar opportunities to a wide array of its students.”

Even while complying with COVID-19 travel restrictions, the Law School at Penn continues to offer a host of international learning opportunities. Simultaneously, law students remain committed to persevering as leaders in LGBTQ law, policy, and scholarship.

This piece originally appeared on the Penn Law Newsfeed.