Climate change, Arctic security and why the U.S. should join the U.N. Convention on the Law of the Sea 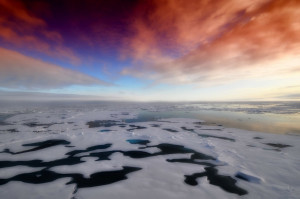 This commentary is one in a series on climate change, national security, and the Arctic produced in association with CERL’s recent conference, Circling the Arctic: Security and the Rule of Law in a Changing North. The conference was organized by the University of Pennsylvania’s Center for Ethics and the Rule of the Law and Annenberg Public Policy Center, with support from the Wilson Center’s Polar Institute.

Climate change is transforming the Arctic in new and dramatic ways. According to the UN Intergovernmental Panel on Climate Change (IPCC), the Arctic is warming two to three times the rate of the rest of the planet. And this month’s “United in Science 2020” report found that the Arctic sea ice extent was the lowest on record for July. Due to a pernicious feedback melting loop, melting permafrost, and the continual possibility of cataclysmic “green swan” events, worldwide sea level rise will be further impacted by Arctic events. What happens in the Arctic does not necessarily stay in the Arctic.

In addition, climate change is both opening maritime trade routes and offering the possibility of natural resource extraction on the Arctic’s continental shelf. It is also creating a whole new operational domain for the world’s militaries.

Unlike Antarctica—which is also being dramatically impacted by climate change—the Arctic lacks a comprehensive, Arctic-specific treaty. The Arctic region is largely governed by the United Nations Convention on the Law of the Sea (UNCLOS), the increasingly important work of the Arctic Council, and a hodgepodge of laws and bilateral agreements. But climate change is increasingly stressing this legal and policy framework.

UNCLOS, aptly described as “A Constitution of the Oceans,” remains one of the most comprehensive and complex international law treaties ever negotiated. It will take on increased importance as the Arctic adjusts to its 21st century climate reality. The United States, however, remains the only Arctic Council member that is not party to UNCLOS. This is short-sighted and contrary to U.S. national security, environmental, and economic interests. Despite continued U.S. intransigence on law of the sea ratification, a remarkably diverse coalition of American national security experts, environmentalists, and business interests support the United States becoming a party to UNCLOS. To be sure, the United States accepts UNCLOS’s key navigational provisions as binding as a matter of customary international law. But as a non-party to UNCLOS, the United States increasingly lacks a “seat at the table” on core law of the sea matters and cannot avail itself of its adjudicatory bodies. It also cannot take advantage of key UNCLOS provisions, such as submitting information to establish the outer limits of Alaska’s continental shelf. Climate change’s opening of maritime trade routes and the possibility for natural resource extraction reinforces the need for the U.S. Senate to provide its advice and consent on this critical treaty.

I will argue the United States should join UNCLOS, and I will highlight three UNCLOS provisions that take on increasing importance in a changing Arctic.

Article 38: The Right of Transit Passage Through the Northwest Passage and Northern Sea Route

These two seasonal waterways—the Northwest Passage that runs through Canada and the Northern Sea Route (sometimes referred to as the Northeast Passage) that hugs the Russian coastline—are both found in the Arctic. The Northwest Passage contains several possible routes running through the Canadian Arctic Islands, linking trade from northeast Asia via North America to the northern Atlantic. The Northern Sea Route provides the shortest maritime link between eastern and western Russia while offering another global maritime shortcut for the world’s shipping.

The right of transit passage applies to straits that are used for international navigation between one part of the high seas or an exclusive economic zone and another part of the high seas or exclusive economic zone. All ships and aircraft enjoy this right, and UNCLOS makes clear that this right “shall not be impeded” provided that ships and aircraft proceed without delay through (or over) the strait. But does the right of transit passage fully apply to these two Arctic waterways? It remains unclear.

As the Arctic sea ice extent decreases, shipping from all nations—to include nations outside the Arctic such as China—will also increase as nations seek faster and cheaper routes. Yet the international right of transit passage is running headfirst into Russian and Canadian claims over these waters. Canada, for example, asserts that much of the Northwest Passage traverses through an Arctic Archipelago that are historic Canadian internal waters. In addition, Russia asserts a similar internal waters claim over three straits that makeup the Northern Sea Route. Both Russian and Canadian claims challenge the right of transit passage through these waters. While these claims have been protested as excessive by both the United States and European Union, their precise legal status remains unclear.

While the United States and Canada signed a 1988 Agreement on Arctic Cooperation that has defused tensions between these two allies, consider how much the Arctic (and world) has changed since 1988. How much longer can the “agree to disagree” approach hold?

The five Arctic coastal states (Denmark (via Greenland), Russia, United States, Norway, and Canada) all have continental shelves in the Arctic Ocean. Converging at the North Pole, each nation’s extended continental shelf comes together the way orange wedges meet at the stem. Approximately half of the Arctic’s ocean floor is composed of the continental shelf, the largest percentage of any of the world’s oceans.

As climate change renews the possibility for Arctic oil, mineral, and gas extraction determining the precise breadth of each nation’s continental shelf will take on increased importance. Indeed, the U.S. Geological Survey estimates that 30% of the world’s undiscovered gas and 13% of undiscovered oil lies north of the Arctic Circle. UNCLOS can aid in resolving competing continental shelf claims with the procedures outlined in Article 76 that establishes the Commission for the Limits on the Continental Shelf (CLCS).

As highlighted above, climate change is dramatically altering the Arctic icepack’s size, opening up shipping lines and navigational waterways for the first time in human history. Beyond the disputed claims by Russia and Canada over the Northwest Passage and Northern Sea Route, climate change is forcing us to look with fresh eyes at each Arctic coastal state’s authority over Arctic “ice-covered areas.”

Article 234 (“Ice-covered areas”) of the law of the sea treaty states:

Coastal states have the right to adopt and enforce non-discriminatory laws and regulations for the prevention, reduction and control of marine pollution from vessels in ice-covered areas within the limits of the exclusive economic zone, where particularly severe climatic conditions and the presence of ice covering such areas for most of the year create obstructions or exceptional hazards to navigation …[s]uch laws and regulations shall have due regard to navigation and protection of the marine environment.

This provision is taking on increasing importance in the Arctic, which has large swaths of ice-covered areas that are melting due to climate change. Article 234 bestows special regulatory authority for Arctic coastal states over ice-covered areas up to 200 nautical miles, the limits of the exclusive economic zone. Yet climate change raises several key questions about the outer scope of this authority. What, for, example, does “for most of the year” and “severe climatic conditions” mean? And won’t climate change gradually diminish any regulatory authority over ice-covered areas as the Arctic ice pack melts? Further, how should we apply Article 234 to the Northwest Passage and Northern Sea Route? And how can this provision be reconciled with the right of transit and innocent passage discussed earlier?

Despite these questions, both Canada and Russia have taken a forward-leaning view of their authority under Article 234. Russia has asserted an expansive view of this authority, requiring notification of foreign ships prior to transiting the Northeast Passage. While this runs counter to other UNCLOS provisions concerning the right of innocent passage through another nation’s territorial sea, it, too, remains unresolved.

The U.S. Should Ratify and Sign the United Nations Convention on the Law of the Sea

A former naval officer, tactical aviator, and military attorney (JAG), Mark Nevitt has served as the Sharswood Fellow at Penn Law and Professor of Leadership & Law at the U.S. Naval Academy. He is currently Associate Professor at Syracuse University College of Law. His research focuses on climate change’s legal and national security implications. Twitter: @marknevitt