On May 1, 1965 a special seminar was held at the Penn Museum as part of the University’s observance of Law Day. Titled “Rule of Law,” the program invited 400 guests to engage with the panel that included the Rev. Dr. Martin Luther King, Jr. as well as Raymond Pace Alexander, civil rights leader, lawyer, politician, and the first African American judge appointed to the Pennsylvania Courts of Common Pleas; Arthur Dean, New York attorney and former head of the U.S. delegation to the Geneva Disarmament Committee and 1967 Pulitzer Prize winning journalist; and civil rights activist Eugene Patterson, who at the time was vice chairman of the U.S. Civil Rights Commission and editor of the Atlanta Constitution. Also in attendance was trailblazing civil rights leader Dr. Sadie T.M. Alexander ED’1918, GR’1921, L’1927, the first African-American woman to graduate from the Law School as well as earn a Ph.D. in economics. In partnership with her husband Raymond Pace Alexander, the Alexanders fought together for equal access to justice for all. 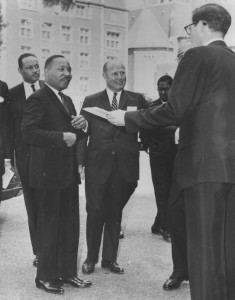 Dr. Martin Luther King as he arrived at University Museum, Law Day USA Credit: University of Pennsylvania ArchivesPresident Dwight D. Eisenhower declared May 1 to be Law Day in the United States just seven years prior in 1958, which was later codified in 1961. While it’s not a government holiday, and is at times viewed critically for replacing the more internationally observed May Day celebration of worker’s rights (which itself began as a mass work stoppage demonstration), Law Day is often an opportunity for reflection, education, and celebrating how the legal process, at its best, strives to preserve and protect the liberties and freedoms afforded to all Americans.

The 1965 “Rule of Law” event was held just two months removed from the March 7 “Bloody Sunday,” where 600 peaceful demonstrators in Alabama marching from Selma to Montgomery were blocked and met with violence by state and local police. Unsurprisingly, civil rights were one of the main issues discussed on the panel at Penn, which was organized by Trustee Robert L. Trescher. Following the events in Selma, as King continued to advocate nonviolent protests, another march gained federal protection. 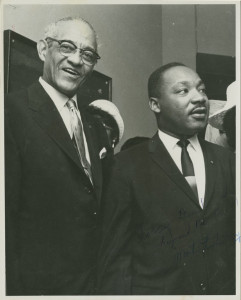 Raymond Pace Alexander and Martin Luther King, Jr., at Law Day USA, held at the University Museum Credit: University of Pennsylvania Archives“Justice at time proceeds with a halting gait and the law has often been slow to speak for the poor, the dispossessed and the disenfranchised,” said King in a quote from an article covering the “Rule of Law” event in the Philadelphia Inquirer.

While King didn’t necessarily have direct ties to Philadelphia or Penn, this was far from his first visit to the area. He attended Crozer Theological Seminary in nearby Chester, PA and even audited three philosophy courses at Penn’s Graduate School of Arts & Sciences.

Nearly three months after the panel took place, on August 5, the Voting Rights Act of 1965 would be passed, expanding the 14th and 15th amendments of the U.S. Constitution to ban racial discrimination in voting practices.