Along with a team of LGBTQ+ and immigrant rights advocates stretching across the country, Omar Gonzalez-Pagan L’10 celebrated a victory on January 8, 2021, when a California federal court enjoined a Trump Administration rule seeking to overhaul U.S. asylum processes in such a way that essentially foreclosed migrants from seeking asylum in the U.S. from gender-based persecution. 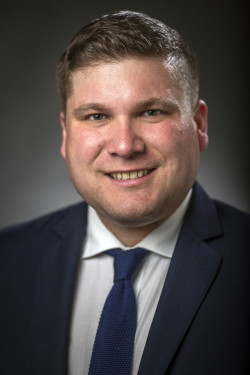 The January case centered on a rule the Trump Administration put forth for a 30-day notice and comment period during the summer of 2020 called “Procedures for Asylum and Withholding of Removal; Credible Fear and Reasonable Fear Review” (“Rule”). In addition to denying asylum for those seeking protection from gender-based persecution, the Rule also provided for the denial of asylum if a migrant traveled through another country on their way to the U.S. and did not apply for asylum in that country.

Gonzalez-Pagan described the Rule as “a complete rewrite of the asylum rules, laws, and policies in this country, in every way, shape, and form.” He went on to explain that “it was done in such a manner that it made it virtually impossible for most people — if not all — to get asylum.”

The team of lawyers opposing the Rule made arguments that attacked both the Rule’s substance and the merits of its procedural history. Ultimately, the court’s decision turned on the fact that Chad Wolf, who signed off of on the Rule, had no lawful authority to do so under the Administrative Procedures Act (APA) on account of the fact that he was not the lawful Acting Secretary of the Department of Homeland Security at the time.

The Trump Administration, in arguing that Wolf did have lawful authority to sign the Rule into law, adhered to an argument that had already been dismissed by several other courts. In his decision, Judge James Donato called the Trump Administration’s persistent adherence to the argument a “troubling litigation strategy.”

“In effect,” Judge Donato wrote, “the government keeps crashing the same car into a gate, hoping that someday it might break through.”

Accordingly, the court decided in favor of the advocacy team, holding that the Rule was unauthorized under the APA.

Though the court made its decision based on administrative legal authority, Gonzalez-Pagan underscored that the team of advocates believes that the Rule was substantively unlawful as well.

“Our complaint particularly illustrates in very graphic detail the horrific persecution that LGBTQ people face outside the United States, why they are seeking refuge in the United States, and how this rule would have prevented them from claiming that refuge,” said Gonzalez-Pagan. “Really, we wanted to make sure we were focused on the human impact of this rule, which was unlawful in multiple ways. Ultimately, the court enjoined it based on the fact that it was issued with unlawful authority, but really we think, and we’re prepared to argue, that the rule was unlawful not just because they lacked the authority to issue it, but because it didn’t make sense — it was contrary to international standards, and it was contrary to the law in the United States.”

Gonzalez-Pagan reflected on the intensity of the experience and the rapid pace by which the advocates were forced to complete their work. The government published the Rule in the Federal Register on December 11. The case was filed on December 21, and the advocates moved for a preliminary injunction the following day. Oral arguments for the preliminary injunction were heard on January 7.

“In a period of really less than one month, we filed a complaint, briefed a preliminary injunction, prepared for oral argument and got that injunction,” Gonzalez-Pagan said. “I think that was extraordinary, particularly because it was in the middle of the holidays, as well,” he added, quick to give credit to the dedicated team working alongside him. “Really it took sleepless days and weeks from all of us working together to make this all happen. I think it speaks to the commitment and to the ability of lawyers to work together to make something happen when we know that it will save lives. Ultimately that’s what this case did: it saved lives.”

Throughout the case, the advocates sought to highlight and elevate the voices of individuals who belonged to communities that would be particularly affected by the Rule. Among the partners with whom the advocates collaborated were the TransLatin@ Coalition and the Black LBGTQIA+ Migrant Project. To Gonzalez-Pagan, working with these groups was important because, instead of relying on generalized perceptions and statistics, the partnerships allowed the advocates to build their case with authentic, individual human stories.

“We cannot bring justice to the issue that we are seeking to address without highlighting and putting forth, front and center, the voices and experiences of LGBTQ people of color, who are ultimately the most impacted by this rule,” Gonzalez-Pagan emphasized. “That was important to us in working with and bringing in the TransLatin@ Coalition and the Black LGBTQIA+ Migrant Project, who have existed for a while and have been doing amazing and extraordinary work. We wanted to make sure that they were a part of this effort. We wanted to highlight their work and their experiences but also their stories, not just from an abstract level, but a from a real, actual face level on the record.”