Through the largest ever study of residential leases, University of Pennsylvania Carey Law School Professor of Law David Hoffman and colleague Anton Strezhnev of New York University offer an unprecedented glimpse into the Philadelphia rental housing market based on nearly 170,000 residential leases filed in support of more than 200,000 Philadelphia eviction proceedings from 2005 through 2019.

In the recently released paper “Leases as Forms,” Hoffman and Strezhnev explain their dual findings that the incidence of illegal, unenforceable terms in residential leases have increased sharply over the last 20 years and that factors such as geography and race do affect the kinds of terms tenants face. The scholars’ future research and scholarship will continue to analyze the dataset with an eye toward proposing better regulatory strategies to address the existing disparities in how formal legal rules affect citizens.

“Residential leases are ubiquitous, economically significant but understudied contracts,” write the authors. “While more than a third of American households rent, the literature has systematically examined only around 100 distinct leases. That deficit is particularly striking for contracts whose alleged breach results in evictions, as these agreements provide the basis for the exercise of the force of the state to, quite literally, turn poor families out on the street.” 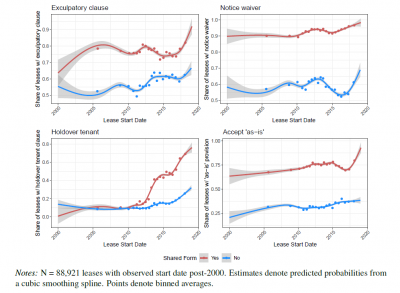 Graphs of shared forms leases over timeThough Hoffman and Strezhnev studied over a hundred thousand private contracts, they found only a handful of distinct standard form leases among them. Such leases are forms often drafted by non-profit landlord associations or downloaded from commercial internet suppliers. In general, these types of leases generated from “cheap internet forms” contain worse rules for tenants than the proprietary leases that were once common. Over time, it has become easier and less expensive for landlords to adopt such common forms, meaning that access to justice for landlords has gradually stripped tenants of their rights.

The authors observe that although landlords don’t generally tailor leases for individual tenants, “some landlords appear to specialize based on tenants’ race, and when doing so, use distinctive lease strategies.” For example, Black tenants are especially vulnerable to lease terms that permit eviction if anyone uses drugs on the premises or commits a crime. 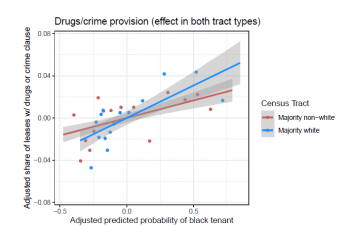 Adjusted share of leases with drugs or crime clause

“As this request is not made in minority-majority tracts,” the authors write, “it has the effect of enabling race-based private policing of tenants.”

The authors’ observations – “the dominance and growth in illegal terms, the role of widely available forms, and the pernicious effects of geography and race” – are discussed throughout the paper, which can be read here.