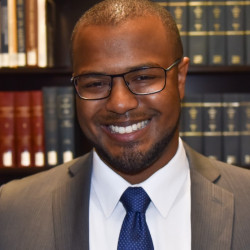 Deuel Ross L’09 has spent much of his legal career fighting for citizens’ voting rights, and the November 2020 election – with its numerous lawsuits over voting rights restrictions – underscored the importance of that work.

Ross, who serves as senior counsel at the NAACP Legal Defense & Educational Fund (LDF), co-led the team in People First of Alabama v. Merrill, which had a direct effect on Alabama voters’ accessibility to absentee voting in 2020. In this case, the plaintiffs disputed narrow eligibility rules for absentee ballots in the face of a pandemic, the requirement for two witnesses or a notary to sign absentee ballots, and a requirement for the inclusion of a photocopied photo ID with an absentee ballot.

In response to the litigation, Alabama gave everyone the option to vote absentee in the 2020 elections. And, after a trial, a U.S. district court ruled that Alabama’s witness and photo ID rules for absentee voting violated the U.S. Constitution and Voting Rights Act. While the United States Supreme Court later issued a stay of the order, about 100,000 out of 300,000 of the Alabamians who cast absentee ballots in November had the option to do so without the restrictions challenged in the case.

Ross is driven by the principle that people have a fundamental right to vote.

“It’s difficult to win voting litigation, but the reason we can and do win is because the facts are there,” he said.

Following graduation from the Law School, Ross held a yearlong fellowship at the American Civil Liberties Union’s Racial Justice Program and clerked for Judge Roger L. Gregory on the U.S. Court of Appeals for the Fourth Circuit. Before joining LDF seven years ago, he spent two years at Fried, Frank, Harris, Shriver & Jacobson LLP as a Civil Rights Fellow, where he worked on complex commercial and civil rights litigation.

“There’s an assumption among people, particularly folks who are well-educated, middle-class, that everyone has ID or should have ID,” Ross said. “But the reality is, when you’re talking about the people who I represent — particularly in states like Alabama, who live in very rural communities or very poor communities — not everyone has ID. Or if they do have an ID, it’s an irregular form, some form of ID that’s not acceptable for voting.”

Alabama, for instance, doesn’t accept Medicare or public housing identification for voting. And in Texas, prior to litigation, a citizen could vote with a concealed handgun license but not with a university or federal employee identification. The politicians who wrote these laws are often open about their discriminatory motives, Ross said. was lead counsel in Greater Birmingham Ministries v. Merrill, which objected to the state’s requirements for photo identification. Ross said the rules only pose barriers to voters instead of demonstrably preventing fraud. The case is currently on appeal to the en banc U.S. Court of Appeals for the Eleventh Circuit.

In addition to handling voting rights cases — and also teaching a seminar course on voting as an adjunct professor at the Law School — Ross has also been involved in several cases involving the desegregation of schools.

In 1996, the Connecticut Supreme Court ordered Hartford public schools to desegregate in Sheff v. O’Neill. For the past seven years, Ross has litigated whenever the state has violated court orders surrounding the landmark case. Three years ago, the state tried to eliminate racial desegregation as a goal at its magnet schools. In a January 2020 settlement, the state agreed to continue its desegregation program for several years and invest millions to open thousands of more seats for children of color in suburban school districts and magnet schools.

School desegregation involves a multitude of fixes beyond the original goal, Ross said; the aims may be to increase the number of Black faculty, improve faculty overall, and improve Black graduation rates.

He said it is satisfying to see a school that had fallen apart be repaired and also to see students’ lives improve.

“Being a civil rights lawyer is something I’m deeply proud to do,” Ross said. “Anything I can do to make voting easier, to make people have access to their elected officials, to make this democracy live up more to its ideals is an honor to do every day, even though it’s not always the easiest thing to achieve.”

This feature is part of a series about alumni who fight for Civil Rights in our communities. Read more at “Advancing Civil Rights” in the Penn Law Journal. More information about alumni events and programming can be found on the Penn Alumni homepage.