Skip to main content area Skip to institutional navigation Skip to search
« Back to The RuleOfLaw Post
Capitol insurrection • April 07, 2021

The Republican Party’s challenge to the rule of law 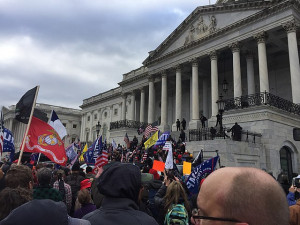 The views expressed in this article are those of the author.

President Trump and his administration have been widely criticized for their indifference and antagonism to the rule of law and many of the norms that maintain the American system of government. But it may be that the most serious threats here came with the aftermath of the fall election of 2020 and the events of January 6, 2021.

After the election the president did not follow tradition and concede the election and recognize the victory of his adversary. Instead, he started a campaign impugning the integrity of the vote and claiming that the election was “stolen.” A head of state refusing to concede an election and then campaigning to have it reversed is a serious challenge to the rule of law, as it encouraged angry followers to storm the legislature to pressure representatives not to certify the vote. Most importantly, these attacks were not repudiated by the Republican Party. This may be the most significant aspect of the months of strife preceding the inauguration of President Biden: one of the two major political parties of the United States did not repudiate these challenges to the rule of law. The significance of this needs to be put into perspective.

One of the most important norms of a democracy is the peaceful transfer of power. For one of two major parties to refuse to respond to challenges to that norm—challenges made by a head of state and a violent mob encouraged by his words—is extraordinary. Electoral systems like ours depend on the existence of political parties—organizations that are long-lived and aim to win elections and govern. The system requires that political parties agree not to use violence or force to win office and to agree to transfer power peacefully.

Let me offer some perspective by referring to an important theory developed by Douglass North, John Wallis, and Barry Weingast in Violence and Social Orders: A Conceptual Framework for Interpreting Recorded Human History (Cambridge University Press, 2009). [1] Their general theory gives central place to the rule of law and related institutions. In their view, controlling violence is a crucial first step to establishing social order in all human societies—early human communities as well as modern states and the liberal and remarkably prosperous ones we live in. Violence is first controlled through agreements among the dominant coalitions of powerful people or political elites not to use violence against one another. These agreements can over time be extended if the incentives to maintain them are strong enough. This allows for the development of a variety of organizations and institutions, making the political order more valuable to these elites and thus more stable.

The North-Wallis-Weingast account focuses on the interests and behavior of powerful individuals and their supporters, which we may think of as the political elites. Early human communities were small and relatively egalitarian. As they grew, rulers emerged, and powerful individuals and groups competed for power and its benefits. These coalitions competed against one another, and resulting political orders were often unstable. This instability and the frequent resort to violence threatened peace and social order. Agreements among powerful groups can pacify their relations, creating further incentives to refrain from resorting to violence and advancing their interests. Resolving elite conflicts by peaceful means and specifically securing interests through enforceable rights can stabilize and expand a social order. On this view, the rule of law originally is for elites; the authors conjecture that the “origin of legal systems lies in the definition of elite privileges.”[2]  In countries like ours, the protections and benefits of law and supporting institutions have generally been extended to all.

Our societies not only have a variety of institutions of government that secure the rule of law, but they are also democracies, that is, have institutions and practices governing the popular selection of many rulers (e.g., heads of state, representative, local officials). The popular selection of some leaders means increasing controls on rulers and extending the benefits of government to all; governing elites become more responsive to their subjects (now citizens). Political parties of the kind we are familiar with—not the “factions” of the early American republic much less those criticized by Rousseau and classical republican thought—play an important role here. They are organizations that can outlive the lives of their current members, with incentives to be concerned with their long-term interests, e.g., returning to office after losing an election. Even if coming to or remaining in power by violent means was in the interests of a particular politician and his/her supporters, it would normally not be in the party’s interests to obtain power through violence; modern political parties expect to be in and out of office regularly and thus need to look at their long-term interest. If a major party will not commit to refrain from contesting elections with force and violence, then any agreement to that effect will collapse; other parties lose much of their incentive to comply with the agreement.

In this light, the significance of the former president’s behavior and especially of his party is starker and more alarming. It is one thing for a mob to violently attack political representatives. For a head of state to encourage this by arguing that an election was stolen and should be reversed through violent means is a serious attack on norms and laws that are central to the political order. But for a major political party to refuse to condemn this behavior is remarkable and serious. We may think that our institutions—the courts, legislatures, agencies, military—did alright during this difficult period. But some of the central players—the president and one of our major political parties—did not. They challenged or refused to endorse norms central to the whole system.

In the past and in many places in the world today, when rulers seized power they frequently imprisoned or killed their opponents; losing power was a life-threatening prospect. Systems like ours cannot exist if certain norms—those challenged by the former President Trump and especially those not endorsed by one of the two major political parties—cease to constrain. Members of the governing classes must agree that elections settle who is to govern and that they are not to be violently contested. That is essential to the rule of law and to our political society.

[1] See also In the Shadow of Violence: Politics, Economics, and the Problems of Development (Cambridge University Press, 2013), co-edited by the three authors and Steven Webb, and John Wallis, Leviathan Unchained (manuscript). I profited from conversations with John Wallis and Brian Kogelmann about these topics, especially the nature of political parties.

Christopher W. Morris is Professor Emeritus of Philosophy at the University of Maryland and a member of CERL’s Executive Board. He is the author of An Essay on the Modern State (Cambridge 1998) and the co-editor with R.G. Frey of Violence, Terrorism, and Justice (Cambridge 1991).