The American Constitution Society (ACS) has selected Madeline Feldman L’22 GEd’22 as a Next Generation Leader (NGL). Each year, from among its 200 chapters across the country, the ACS chooses a small group of students who have demonstrated exceptional leadership and who have the interest, skills, and ability to remain a part of the ACS community into the future. 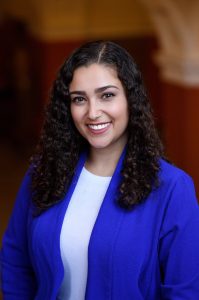 NGLs receive unique access to quarterly training and career advancement calls, special invitations to press and donor calls, priority access to fellowships and scholarships for ACS activities, and other various types of career and networking support from members of the ACS community.

Feldman, a native of Gladwyne, Pennsylvania, said she came to the University of Pennsylvania Carey Law School unsure of where she might find community, but she knew she had found her “home in law school” when she attended an ACS voting rights lunch event.

“The event not only gave me a new perspective on an important topic outside the scope of my 1L classes,” she said, “but also enabled me immediately to connect with the students sitting around me in the audience.”

Feldman joined the ACS as a 1L Representative and later became co-president of her chapter.

“The core values of ACS, including protecting individual rights and liberties, the need for genuine equality, access to justice, democracy, and the rule of law, helped me clarify my beliefs about the role the law and lawyers must play in society,” she said. “ACS has also personally given me student mentors, advisors, friends, and a supportive group that has shaped my law school experience.”

During her tenure as co-president, Feldman spearheaded the organization of the event series called “How to 1L,” which focuses on first-year law student growth and assistance and which has become widely known among Penn Law students.

“My personal goal as a leader is to provide community and mentorship,” said Feldman, “and I am thrilled to be able to continue carrying out that vision as an ACS Next Generation Leader, where I hope to support other future leaders from the organization that showed me how to be the lawyer I want to be.”

“Madeline’s application and work as a student chapter leader during this very challenging year really impressed our team,” said Paulas. “We are delighted to recognize and celebrate Madeline’s leadership.”

Feldman holds a degree in Human Development from Cornell University and is pursuing a Master of Higher Education in Penn’s Graduate School of Education.

She expressed appreciation for the support of all of her professors at the Law School, especially Professor of law Allison Hoffman, who wrote her NGL recommendation, and ACS advisors Professor of Law Kermit Roosevelt and Lecturer in Law Neil Makhija.