Instead of following a linear career trajectory, Patricia Stottlemyer L’17 has left room to act responsively, consistently choosing to go where she will be able to make the most difference. 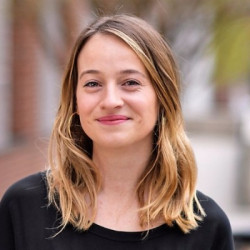 “That has been my philosophy throughout my career: Where can I be of use? Where is there a need? If my skill set matches that need, then let’s go,” she said.

The persistent power imbalance that she first noticed while working with foreign policy and advocacy think tanks in Washington, D.C., drove Stottlemyer to apply to law school. Her goal is — and always has been — to make these spaces more inclusive. Stottlemyer would especially like to see more representation from populations who are most affected by the policies being made. For Stottlemyer, her law degree functions as a tool she can use to continue to work toward a more equitable policymaking space.

At Human Rights First, Stottlemyer works as an Impact Litigation attorney and focuses on bringing strategic federal court cases that lead to macro-level policy changes in asylum and refugee law. Primarily, she and her colleagues focus on fighting to ensure that every asylum seeker has access to the legal system in the first place.

“Meaningful access to humanitarian protection is exactly what Congress sought to codify in the Refugee Act of 1980 when they passed laws to bring our domestic statutes into compliance with our international legal obligations,” she said. “Whenever a policy that comes down that says an entire category of individuals is not going to be eligible for asylum, that triggers the ‘access’ issue in our minds. You’re blocking the opportunity to even access proceedings where someone might present a claim for humanitarian relief. You’ve now closed the door on them. That’s where we’ve aimed our fire power.”

Recently, Stottlemyer worked as co-counsel in a case challenging a Trump-era policy that rendered automatically ineligible for asylum any asylum seekers who entered the U.S. at the southern border at a point other than an official port of entry. Stottlemyer characterized this case as a “slam dunk” for asylum rights advocates, as the policy violated the plain text of the Immigration and Nationality Act. She and her team won the case on summary judgment, and the policy was vacated nationwide.

“I want to change the whole system, but I’ve got one tool. I’m a litigator, and litigation is necessarily limited in what it can achieve,” Stottlemyer said. “You put in a lot of work, but when you do win, you win something big. To defeat a policy nationwide that harms thousands – if not tens of thousands – of individuals is a pretty fantastic thing that you can achieve with that one discreet tool.”

Stottlemyer emphasized that Human Rights First relies on clients’ stories to shape both their legal agenda and their strategy. For Stottlemyer, the most important thing a public interest lawyer can do is to work to change the power dynamic that disenfranchises those whose rights are at the center of the fight.

Stottlemyer credits her experience as a student in the Law School’s Transnational Legal Clinic with instilling in her a client-centered legal philosophy. She remembers Adjunct Professor of Law Ayodele Gansallo and Practice Professor of Law Sarah Paoletti instructing students that lawyering should be about recognizing the clients’ complex lived experiences — that they are more than the legal matter they’re dealing with. Driven by this philosophy, Stottlemyer says lawyering should be an “exercise in empathy.” In her current role, Stottlemyer supervises another alum of the Transnational Legal Clinic, who leads all of her legal strategy analyses with attention to the client’s perspective.

“I was never interested in the law for academic reasons; I was interested in the law as a tool to achieve justice as part of a broader movement, and Clinic is where that happens,” Stottlemyer said. “Clinic was a fabulous opportunity for me to do what I had always wanted to do with my law degree, which was to make it real and to use it as a tool for change.”

Stottlemyer’s favorite part of her work as an impact litigator is the connection she gets to build with her clients. In particular, she loves that she can amplify their stories and experiences to build a more just system.

“It’s been thrilling,” Stottlemyer said. “It’s been a privilege for me to be able to use my privilege – and having a degree from Penn Law is a massive privilege—in a meaningful way. That’s kind of the dream, right?”

This feature is part of a Penn Law Journal series about alumni who fight for Civil Rights in our communities. More information about alumni events and programming can be found on the Penn Alumni homepage.