Is it immoral to consume factory-farmed animal products, irrespective of the externalized costs placed on animals and the environment? Do national security concerns ever outweigh the value of individual liberty in the context of personal social media data? If a person donates money to a charitable organization and that organization uses the money to do harm, is the donor at fault?

These difficult questions are some of the questions that one might hear being thoughtfully discussed and debated at the Ethics Bowl, a competition encouraging high schoolers to engage in respectful, principled debate over real-world issues. 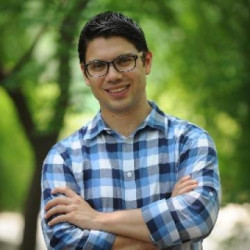 Dustin Webster ML'21Dustin Webster ML’21 first learned about the Ethics Bowl as a graduate student at Columbia University. Webster is also a doctoral student in the Graduate School of Education (GSE). While at Penn, Webster worked with his advisor Sigal Ben-Porath and Professor of Philosophy and Education Dr. Karen Detlefsen to connect Philadelphia high schoolers to the competition. Webster and Detlefsen co-taught an Academically Based Community Service Course in the Fall of 2019 that ultimately led the Perry World House to host the first-ever Philadelphia Regional Ethics Bowl in early 2020.

Following performances in regional competitions, teams then have the chance to compete at the national level. From April 9 to 11, 2021, a team of four high schoolers from Philadelphia’s Academy at Palumbo competed virtually in the National High School Ethics Bowl, where they were awarded the esteemed Robert Ladenson Spirit of the Ethics Bowl Award.

“The kind of civility it is has to do with civility in discourse and communication – how we speak to one another—but on a deeper level, it also includes listening carefully and making a serious effort to understand the viewpoints of other people, most importantly the people who have views that are different from yours,” Ladenson said.

Palumbo’s award-winning team included Hanadi Abdulkadir, Fatoumata Coulibaly, Annamaria Flausino, and Chanel Jordan. As Spirit of the Ethics Bowl Award winners, the students were deemed by their colleagues to have best exemplified the spirit of the Ethics Bowl, meaning that they demonstrated an abundance of respect to others both formally and informally, thoughtfulness in the expression of their opinions, and good sportsmanship throughout the competition.

“I cannot express how proud I am of the Palumbo team for this accomplishment,” Webster said in a statement. “In my opinion, the Spirit of the Ethics Bowl award is the highest honor of the bowl, as the ‘competition’ aspect is secondary to that which is gained from engaging in the process of the bowl itself and embodying the ideal of these dialogues. This demonstrates just how thoughtful of a team Palumbo is, and I hope it is also a marker of the ethics bowl culture which we have worked hard in our first two years to cultivate here at the Philadelphia Bowl.”

Learn more about the Law School at Penn’s Master in Law program, including the array of achievements of our trailblazing students and alumni.