In a forthcoming article in the Michigan Journal of Race & Law, Raymond Magsaysay L’22 explores the multifaceted problem of Asian Americans and Pacific Islanders (AAPIs) being largely left out of recent conversations about overhauling the criminal justice system to address racial injustice. The selection of Magsaysay’s article for publication is a distinguished honor as law students rarely have the opportunity to publish full-length articles in legal journals. 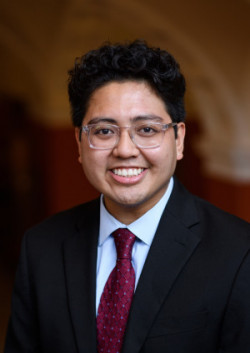 In “Asian Americans and Pacific Islanders and the Prison Industrial Complex,” Magsaysay breaks new ground with an in-depth discussion of AAPIs and mass incarceration – a topic that has received virtually no attention among legal scholars.

“Raymond’s article is a wonderful extension of the learning he’s done at the University of Pennsylvania Carey Law School into an innovative and impactful scholarly article,” said Dean and Bernard G. Segal Professor of Law Ted Ruger. “It is extremely rare for a current law student at any law school to place an article for publication in another top school’s journal, and it speaks to the strength of Raymond’s scholarly contribution that the Michigan editors selected his piece from a pool that included many submissions from tenured law professors from around the country. I had a chance to work with Magsaysay as a research and teaching assistant this past Spring, and saw first-hand his extraordinary intellectual curiosity and his ability to take a fresh look at our oldest and most important constitutional questions.”

“This article makes an original and important contribution to abolitionist legal scholarship not only by documenting AAPI people’s overlooked entanglement in the prison industrial complex, but also by showing how incorporating AAPIs into abolitionist analysis strengthens calls for transformation,” said Dorothy Roberts, George A. Weiss University Professor of Law and Sociology and the Raymond Pace and Sadie Tanner Mossell Alexander Professor of Civil Rights.

“Identifying and addressing this issue, I intercalate AAPIs into powerful, contemporary critiques of the prison industrial complex, including emergent abolitionist legal scholarship,” said Magsaysay. “I argue that the model minority myth, an anti-Black racial project, leads to the exclusion of AAPIs in both mainstream and critical studies of crime and carcerality. I also highlight how various AAPI subgroups are stereotyped and criminalized in distinct forms.”

Magsaysay begins with a discussion of how criminalized AAPIs’ voices and experiences have been erased within both mainstream and critical calls for criminal reform. He highlights the experiences of AAPI youth with the school-to-prison pipeline and points to the limited data on AAPI prison populations to show that AAPIs are caught in the carceral web of mass incarceration.

“Adopting multidisciplinary and multimodal methods, I identify and analyze distinct forms of racial profiling and racialized bullying that drive AAPI students out of schools and into prisons. In particular, I focus on how subgroups of AAPI youth are simultaneously criminalized as whiz kids, gangsters, and terrorists,” Magsaysay writes. “In uncovering previously unexamined dimensions of the criminal system, I stress how the exclusion of AAPIs in critical discourse obscures the actual scale of the carceral state, erases complex intra- and interracial dynamics of power, marginalizes criminalized AAPIs, and concurrently reinforces anti-Blackness and other toxic ideologies.”

He concludes by proposing abolitionist-informed solutions to the school-to-prison pipeline, such as the implementation of an Ethnic Studies curriculum, and calls on AAPI communities to build more meaningful intra- and interracial coalitions.

“Magsaysay not only makes a forceful case that AAPIs must be considered to fully understand or deconstruct the prison industrial complex,” said Amanda Shanor, Assistant Professor at the Wharton School of the University of Pennsylvania, “but also breaks important intellectual ground by theorizing the way in which the invisibility of AAPIs to analyses of the criminal justice system perpetuates anti-Blackness in mass incarceration.” Shanor supervised Magsaysay’s research on the project.

Magsaysay, one of three inaugural First Generation Professionals Fellow, hails from the Philippines and has called San Francisco, CA home since immigrating to the United States at age 12. He holds a master’s degree in teaching from the Universidad de Alcala in Spain and an undergraduate degree from Vassar College, with general and departmental honors, in Sociology, with correlates in English and Spanish.

Magsaysay is a Harry S. Truman Scholar and serves as the Public Service Chair of the Asian Pacific American Law Students Association (APALSA). Most recently, he was chosen to participate in the prestigious Don H. Liu Scholars Program.

After graduating from the Law School in 2022, Magsaysay will clerk for Justice Goodwin Liu on the Supreme Court of California and then for Judge Jacqueline Nguyen of the U.S. Court of Appeals for the Ninth Circuit.