Skip to main content area Skip to institutional navigation Skip to search
« Back to The RuleOfLaw Post
interrogation and torture, The Méndez Principles • June 17, 2021

The Méndez Principles: Sharpening the View on Interrogation and Utilitarianism

CERL is pleased to present this article (and the entire Just Security series) based on the newly-released Principles on Effective Interviewing for Investigations and Information Gathering, also known as The Méndez Principles. Named for Juan Méndez, the former UN Special Rapporteur on Torture who in 2016 called for the creation of a universal protocol for lawful and humane interviewing standards, the principles provide guidance on conducting non-coercive and rapport-based interviews with legal and procedural safeguards. CERL has been an advocate of Mr. Méndez’s call for the protocol and welcomed him as the keynote speaker at CERL’s 2018 conference on interrogation and torture.–Claire O. Finkelstein, CERL Academic Director

The Méndez Principles: Sharpening the View on Interrogation and Utilitarianism, by Steven J. Barela, was originally published in Just Security.


(Editor’s note: This article is part of a Just Security series on the newly released “Principles on Effective Interviewing for Investigations and Information Gathering,” an expert-led initiative responding to a 2016 appeal to the U.N. General Assembly by then-U.N. Special Rapporteur Juan E. Méndez to develop such standards. The series outlines the origins and the scientific, legal, and ethical underpinnings of the guidelines, also known as the “Méndez Principles” in honor of its co-chair.)

Much of the rationale for harsh interrogation techniques since 9/11 has relied on little more than a footnote from an otherwise enormously productive jurist, philosopher, and social scientist at the turn of the 19th century. Jeremy Bentham, often recognized as the founder of classical utilitarianism, was notoriously credited with creating the first “ticking bomb scenario” to justify so-called torture warrants. The hypothetical thought experiment about whether it is morally justifiable to torture one prisoner with information about rescuing a great number of innocent people became a prominent part of the discussion. One example of this was how frequently it featured in the popular television series “24.” Yet these three sentences from Bentham were cherry-picked from a text that has never been fully published and has fueled a range of wild misconceptions.

While many corrections are needed, this article focuses on two points from Bentham that can generate a better understanding of the new Principles on Effective Interviewing for Investigations and Information Gathering. First, Bentham’s utilitarian view on torture keenly touched on the same elements that drive contemporary scientific research into the effectiveness of interrogation techniques; he wanted to know if torture worked. This should not be surprising, as Bentham was arguing that the moral doctrine of utility included: 1) the person subjected to abuse has the desired information; and 2) the imposed ill-treatment is the most likely method to extract this material. If these two criteria cannot be met, someone who is a utilitarian would oppose torture.

Second, Bentham never published any of the mere 68 pages he wrote on the subject. For a prolific writer of around 95,000 pages over his lifetime, these tiny fragments on torture appear to be little more than musings in the privacy of his own study. Briefly describing the current reconstruction project of Bentham’s vast literary estate, and how his writings in question have now become known, helps contextualize the few words that have done such damage. 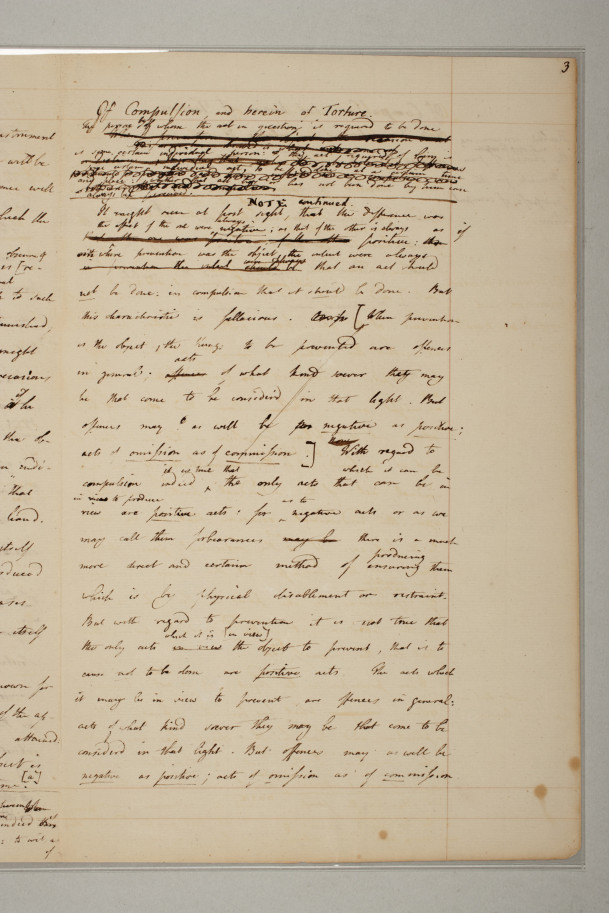 Bentham on Torture: Does it Work?

Bentham had no idea whether interrogational torture worked. To know this would have been impossible in his time because the scientific tools simply did not exist. However, this did not stop him from making audacious — and strikingly contradictory — statements in those musings about the effectiveness of the practice. Yet with focus on cost-benefit morality, Bentham drew attention to the question of efficacy. He picked up his pen in 1777 to start jotting down his thoughts, and searched for a utilitarian moment when torture could be morally justified. He completed only four short texts on the matter, but the wrong turns, dead-ends, and backtracking they contained are illuminating.

Most important to note are the obvious inconsistencies. At times he explained that the real objection to torture “seems at bottom to be no other than its extreme force and efficacy.” At other moments he wrote, “[i]nstances have been known in which delinquents have endured the very extremity of torture, rather than to disclose their coadjutors.” There are numerous examples, but inconsistency is such a defining element that one scholar explained, “His indecisiveness about whether or not sufficiently intense physical pain is guaranteed to determine the behaviour of its victims goes to the heart of his thought.”

Beyond Bentham’s manifest wavering, there are sharp insights. For example, he recognized that interrogation is meant to be a “means of discovering the truth.” Though this may seem obvious, urges for retribution often cloud the issue. This framing was, in fact, borrowed from his frequently mentioned foil in the texts, Cesare Beccaria, the Italian philosopher whose powerful little book on Crimes and Punishments was sweeping across Europe at that time, often resulting in an end to torture as a tool of government. Bentham wrote (unclearly) in his essay that he either had or planned to directly contest Beccaria’s claim that torture was ineffective for unearthing facts, but such a text has not been found. Still, use of this yardstick ran throughout his work, as Bentham explored torture’s utility and sought a clear objective for such abuse.

This exposes an important overlap with the Méndez Principles. A 2016 appeal by then-Special Rapporteur Juan E. Méndez to the U.N. General Assembly contained a directive that such a document outlining principles “must reiterate the precise aim of questioning, namely to obtain accurate and reliable information in order to discover the truth of all relevant facts about matters under investigation” (my emphasis). The first paragraphs of the new document dutifully define an interview as a structured conversation and provide the instruction that “[t]he objective is to obtain accurate and reliable information.” In that sense, Bentham, Beccaria, and Méndez specify the same test for effectiveness.

Bentham was fully aware that, for torture to work, it had to be inflicted on the right person who knew the desired information. Within the limited ink he spilled is a great deal of toggling between the certainty and uncertainty of having the correct person, which suggests two takeaways. First, Bentham expressed genuine concern about torture “falling upon the innocent,” because otherwise, “[o]ne may go on torturing and torturing him without end.” Second, in his so-called ticking-bomb scenario constructed later, he landed on the awkward truth that torture can only occur when “a suspicion is entertained.” In other words, he came to realize that the first criteria of utility – that the person subjected to abuse has the desired information — could never be fully met; torture must occur on suspicion.

Bentham by no means had access to the same methods of scientific study that exist today. Nevertheless, the way he discussed the precise questions that drive current research are telling, since it casts light on the instruments now being implemented. One seminal 2017 article on the science, Psychological Perspectives on Interrogation, lays out these three criteria for measuring inefficacy and efficacy, followed here by a description of how Bentham’s writings relate to each of them:

In addition to the problems for gaining accurate and reliable information, using cruel practices can weaken and destabilize a government and thus can also be ineffective in a broader sense. Bentham certainly did not miss this point, as he explicitly and repeatedly drew attention to the danger that torture could bring “the establishment of tyranny,” and raise “a constant and universal alarm (original emphasis).” The Méndez Principles, in turn, note that instituting effective interviewing helps build public trust in institutions. Put another way, both are concerned with the effectiveness of interrogation on a tactical and strategic level.

His Literary Estate and The Bentham Project

So how do we make sense of these inconsistent texts within Bentham’s wider writing? For more than 125 years, Bentham’s vast collection of writings sat in a state that has been described as “woefully inadequate,” as it was neglected and incomplete in the only body of his works complied. In 1959, University College London (UCL) established The Bentham Project to rectify this by returning to what he actually wrote himself. The initiative has engaged multiple generations of scholars and has published 34 of an anticipated 80 volumes collecting his writings, with projected completion in 2050. The complete works are now also available in electronic form.

The writings discussed above were a small sliver of an enormous body of legal criticism that Bentham had abandoned. Since these texts remained unpublished until only recently — and some of them remain so today — scholars are now piecing together the full circumstances in which Bentham assumed torture would operate. Yet, as Philip Schofield, a UCL professor of the history of legal and political thought, wrote, “It is not at all clear that Bentham continued to advocate the use of torture. Rather, the presumption is that he ceased” (p. 148). It is possible the problems identified above were clear to Bentham himself, and that might explain why they were never pursued to completion.

The most extensive texts on torture, encompassing 60 handwritten pages from the 1770s, were first published by scholars within the Bentham Project in 1973. It is from there that the footnote was taken in 2002 to justify torture warrants. The reference buried in a footer comes from a manuscript written in 1804 that has not been published to this day. The scholars who published the 1973 installment explicitly cautioned readers that, “taken out of context, [these texts] might provide ammunition for those who seek to advance a seemingly plausible justification for resort to torture.” This warning was tragically disregarded.

Despite the coincidences that are found with Bentham’s work, none of this is to say that the Méndez Principles are based on utilitarianism. Rather, the new document is an interdisciplinary work integrating the binding laws for protecting individuals who undergo questioning with the related science and ethics. As the document states, “Findings from empirical scientific studies, international legal standards, and value-based professional duties constitute the foundations of effective interviewing. When integrated in practice, these foundational elements enable interviewers to gather accurate and reliable information while operationalising human rights.”

However, a clearer understanding of Bentham’s work does much more to support the new document than to undermine it. During my visit to UCL for the archival work, I had the opportunity to discuss my research with Schofield, the general editor of the Bentham Project. He made the point that Bentham was an avid pursuer of facts, figures, and records for his mathematical calculation of morality and would have surely welcomed the current empirical studies on efficacy.

Steven J. Barela (@StevenJBarela) is a Senior Research Fellow at the University of Geneva in the Global Studies Institute and a member of the Law Faculty in the Department of History and Philosophy of Law. He is also an Associate Research Fellow at the Geneva Academy of International Humanitarian Law and Human Rights.

CERL is grateful to Steven J. Barela, Senior Research Fellow at the University of Geneva in the Global Studies Institute, for his work in the publication of these articles on The Rule of Law Post. This work, which includes serving as Editor leading the Chairpersons’ Editorial Group of the Méndez Principles initiative, is supported by the Swiss National Science Foundation.