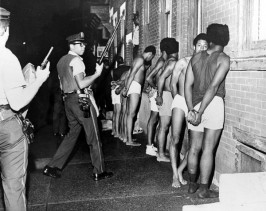 Aftermath of 1970 Raid on a Panther Headquarters in Philadelphia (Courtesy of ExplorePAhistory.com)

In one of my earliest writings on law-genre documentary films, I invoked the concept of the “authenticating audience”—which, in the words of the late black novelist Toni Cade Bambara, is “’the audience that can really call you out if you’ve got it wrong or applaud you because they know you’re right.’”  In other words (my own), “[a]n authenticating audience speaks from genuine experience and draws on an engaged, organic or grounded expertise.”  Authenticity, rather than accuracy which is ever elusive, is one measure of the quality of a documentary.

I think that I saw an authenticating audience in action when documentary filmmaker Stanley Nelson traveled down to Penn from NYC on three consecutive Thursday afternoons to talk about his work.  Nelson, one of the foremost contemporary nonfiction film interpreters of the black civil rights movement, was speaking as the 2014 Africana Studies Department’s Artist-in-Residence.

Nelson’s first session was devoted to “The Black Panthers: Seize the Time,” a work in progress (somewhere between production and post-production).  When finished, the documentary will be part of a multi-platform project for PBS entitled “America Reinvented.”  In the audience were a few undergrads, a few more graduate students, a budding doc maker or two and a smattering of academics.  We were almost outnumbered by folks who had a literal claim to ownership of the history Nelson’s film will depict.  Word had gone out to the local chapter of the Panthers alumni and they and others of a similar mindset were well-represented.

There was a palpable tension in the room as Nelson began his talk.  It was hard to identify its exact source.  Members of the black power generation (myself included) came of age not seeing mass media images of themselves as agents of justified resistance and instigators of positive change.  The former Panthers in the audience may have been concerned that they would be condemned for their militancy according to contemporary standards of civility.  Or perhaps they feared that their combative response to a racist social order would be homogenized and not taken seriously now decades later.  After all, the material conditions that motivated their radical confrontations with authority (black poverty, inferior urban schools, police abuse) are accepted today without much protest.   They might have doubted that a documentary intended for PBS would do justice to their youthful political transgressions and fierce opposition to mainstream institutions.  It is also likely, though, that the skittish vibe came partly from the rest of the audience which was worried that the ex-Panthers, despite their gray or balding heads and disappearing waistlines, would become combative and rude about their depiction. There may have been concern too that they would take the discussion off in a direction that was too polemical and insufficiently substantive for the academic setting.

As the event progressed, though, everyone seemed relatively pleased with the clips that Nelson showed from the early rough cut of the Panther film.  Many questions were asked and there was a bit of push back on both sides.  The former Panthers offered suggestions of topics Nelson might cover based on their own lived experience as well as sources of images and documents he might seek out.  (For instance, someone noted that the late documentarian St. Claire Bourne had tried to make a film about the Panthers.  Where was his footage?) The subject of sexism within the organization was raised by a young feminist academic and there followed a debate as to whether sexism should be addressed in Nelson’s film with former female Panthers arguing against inclusion because there were more important issues and others asking how critical could the film be if sexism was not addressed.   Overall, the Panther alumni in the audience may not have been entirely satisfied with what they saw and heard from Nelson, but they thanked him for his film work. 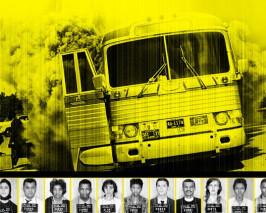 The two subsequent sessions were tamer affairs, although the presence of representatives of the black power generation remained strong.  During the second session, Nelson responded to questions from a graduate student and illustrated his comments with clips from “Freedom Riders,” an Emmy-award winning documentary that was shown on PBS in 2011.  The third session was devoted to a screening of “Freedom Summer” which premiered at Sundance in January and is scheduled to air on PBS in June.  In Nelson’s telling, the black SNCC workers who were in Mississippi before the summer of 1964 feared the naiveté of the white volunteers would lead to danger and were not uniformly in favor the latter’s participation. This was news to me.

Though the edginess in the encounter between the filmmaker and his audience was missing as Nelson’s residency continued, Nelson revealed more about how he, as a black documentary filmmaker, negotiates the conflict that can arise from responding to the concerns of an authenticating audience which the ex-Panthers represented while bringing the uninitiated and the young along at the same time.  Not everyone will agree with the choices he makes but many readers may find them instructive.

In a year when “Twelve Years a Slave” won the Academy Award for Best Picture, Nelson is very positive about documentary work as compared with fiction filmmaking.  Fiction features take years.  There is a freedom in doing documentaries.  The equipment is relatively light and affordable.  You can shoot it yourself.  There is no need to wait for approvals.  Although fiction films make money and few documentaries do, there is a great deal happening with documentaries that is interesting, whereas fiction films are stuck.

Nelson’s work is broadcast on PBS, the national public television network.  PBS documentaries may seem bland and uncontroversial, particularly to younger viewers, but the network does get films “made and watched.”  Nelson’s Firelight Media Producer’s Lab has been successful in assisting filmmakers of color to finish their documentaries and get them shown on PBS.  Past and present Lab participants include directors Jason DaSilva (“When I Walk”), Christina Ibarra (“Las Marthas”), Dawn Porter (“Spies of Mississippi”), Christine Turner (“Homegoings”), Bryan Hunt (“Soul Food Junkies”), Chico Colvard (“Family Affair”) and Peter Nicks (“The Waiting Room”). 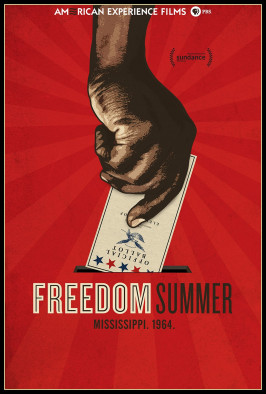 Poster from "Freedom Summer"Nelson asserted that he has gotten good at identifying what is “real” and can be substantiated, as opposed to just “black speak.”  However, reminding interviewees to maintain a “back in the day” frame of mind can be a struggle.  One can imagine the advantages of their responding to questions as if they do not know the outcome of their history.  This keeps the narrative open, moving and suspenseful.  “Freedom Riders” becomes an adventure story, one that immigrant groups can particularly appreciate.  “Freedom Summer” is edited in a way that makes the audience feel that the Mississippi Freedom Party delegates had a chance of being seated at the Democratic Convention in Atlantic City in 1964. Nelson said that the best moments occur when the audience feels as if it has discovered something. To that end, he has not used a narrator in his most recent work.  This expands the personal choice of the audience members. No one is telling them how to think.  It can be a bit of a dare to forgo narration, according to Nelson.  It does not always work, especially if there is too much backstory.

In Nelson’s opinion, history is generally presented as a long upward climb when it is actually a roller coaster; there is always something to fight for.  In my opinion, this may be the key to approaching his documentaries.

Black people’s struggles for equality tend to lose some of their transgressive and subversive quality when they are reduced to the dimensions of a two-hour PBS documentary program.   They also seem removed from the political reality of the here and now.   It rests with viewers to make the connections between militancy and change, practical action and polemics, past and present in the continuing cycle of black progress and setbacks.  For example, voter ID laws and felony disenfranchisement have put the right of minority Americans to vote in jeopardy once again.  “Freedom Summer” with its focus on voting rights and the Mississippi Freedom Democratic Party shows that the path to full enfranchisement for blacks has not been a straight line; it also illustrates that advancement on that front may require greater sacrifice and direct action.  SNCC alums and the courageous black people of Mississippi who interacted with them were essential to Nelson’s telling of the events of that momentous summer, but their role with regard to the documentary may be larger than that.

There is a process of negotiation that occurs between documentarians of Black history like Stanley Nelson, their interviewees and informants, and their various audiences that extends over the course of production, vetting, distribution, assessment and outreach, especially their use as educational and mobilization tools.  In this regard, authenticating audiences can be a deep and rich reservoir of relevant information, experience and dedication to the documentary exercise.  They can turn historical nonfiction films into an invitation for a discussion of current events.  The vibrancy that the engagement of an authenticating audience can produce over the life of such documentary films adds to their social impact. The twitchy anticipation that I felt when Stanley Nelson encountered the Philadelphia Panther alumni in a classroom at Penn added a level of complexity and immediacy to the footage he showed and to my reception of it.  I believe that was a good thing.