The Art of the Movie-Title Steal

Have you seen The Art of the Steal? No, not the Don Argott documentary about legal battle to move Albert Barnes’s $25 billion private art collection from the suburbs of Philadelphia and to a downtown museum. I’m talking about the new heist movie starring Kurt Russell and Terence Stamp.

Or is Deliver Us from Evil on your must-see list? No, not the Oscar-nominated, Amy Berg documentary about sexual abuse at the hands of a Catholic priest. I’m talking about the forthcoming crime-horror film starring Eric Bana.

This year will see the release of two Hollywood films that share titles with two recent, prominent documentaries. Is that legal?

Reusing movie titles happens all the time, mostly because copyright law generally does not protect words or short phrases and titles of one-off or “single work” films (as opposed to a series or movie franchise), generally are not protected by federal trademark law. (See In re Cooper, 254 F.2d 611 (C.C.P.A. 1958), cert. denied, 358 U.S. 840 (1958).)

The Art of the Steal and Deliver Us from Evil are only the latest examples of fiction films poaching a documentary title, or vice versa. Think of Spellbound, an Alfred Hitchcock classic and the celebrated spelling-bee documentary. Or Intimate Stranger, a 1991 Alan Berliner documentary and a 2006 Lifetime television movie. Or Riding the Rails, a documentary nominated for the grand jury prize at Sundance in 1997 and a Betty Boop cartoon from 1938. Catfish was a short film before it was the documentary by Henry Joost and Ariel Schulman. The Bridge, American Dream, Style Wars, and Why We Fight, to name a few, are titles for multiple film or television projects.

The film world has managed to survive without stronger legal protection for titles of creative works. Still, it’s understandable that documentarians might want to keep their titles to themselves. Having a memorable title, which serves as a signifier for only one creative work, is worth something. References to a Hollywood film might bury online search results for a documentary, and film review sites might give a false impression about the quality or reception of the prior documentary. For instance, the Hollywood The Art of the Steal has a 45 percent rating on Rotten Tomatoes, as of this writing. The documentary has an 85 percent rating. But, for me at least, Google displays the 45 percent rating prominently on the first page of search results, right under the IMDB entry for the documentary: 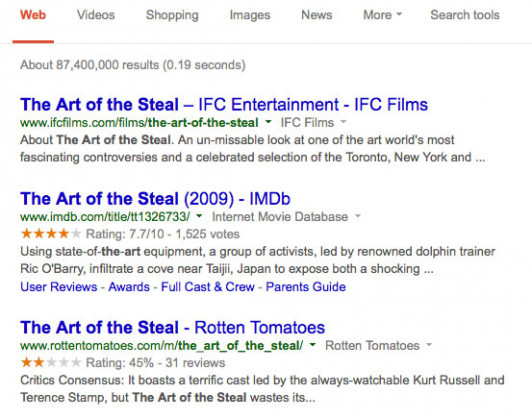 The top search results for "The Art of the Steal" point to the documentary, but the Rotten Tomatoes score refers to the Hollywood version.

Before the producers of The Art of the Steal documentary start thinking about legal action, though, it’s worth remembering that the title was not even original to the documentary. Seven years before the film premiered, Frank Abagnale, Jr., the real-life con artist portrayed by Leonardo DiCaprio in Steven Spielberg’s Catch Me If You Can, published a book called The Art of the Steal.

What, if anything, can documentary filmmakers do to protect titles from being stolen? Not much, legally. A few years ago, attorney Jonathan Handel published “Mark My Words,” an interesting article on this subject, in Los Angeles Lawyer, in which he proposes possible paths for title protection. Read the article here (.pdf). Most of the approaches, however, appear to entail more trouble than they’re worth, particularly for documentary filmmakers.

First, he suggests trying to register for federal trademark protection despite overwhelming precedent to the contrary. He observed that, for some reason, Reservoir Dogs, The Blair Witch Project, and Judge Dredd all managed to get federal trademark protection, even though they are single work films. (Trademark attorney Jill Pietrini, who is listed as the attorney of record on the Reservoir Dogs and The Blair Witch Project registrations on the U.S. Patent and Trademark Office website, did not respond to an e-mail request to discuss the topic.) But the USPTO usually declines registration for single-work films.

Handel next suggests that filmmakers file “intent-to-use” applications purporting to seek trademark protection for a series. This approach might be particularly hard for documentary filmmakers, who create series much less frequently than their fiction-film counterparts. A filing filmmaker must have a “bona fide intent” to create a series. The upside of this approach is that the title on the application would show up in trademark searches, and might dissuade a potential poacher looking to avoid a legal fight.

Handel also suggests state trademark registration, which might have a similar deterrent benefit, but he acknowledges that such protection is patchwork, and states may follow federal trademark practices to deny the registration of a single-work mark. He also discussed the possibility of foreign trademark registration, particularly in Canada. Canada, he points out, is often folded into domestic theatrical distribution, so protection in Canada might preclude someone from taking the title in the United States.

Still, trying to protect your title from poaching might not be worth the trouble, particularly if the poacher is a Hollywood studio with deep pockets.

There are a few low-cost or no-cost steps filmmakers can take to try to preserve their title. The first, most obviously, is to select a unique title. Titles like I Like Killing Flies, LaLee’s Kin: The Legacy of Cotton, or The Untold Story of Emmett Louis Till are unlikely to be recycled as Hollywood titles. Next, filmmakers can register domain names and create social media accounts using the title in such a way that a Hollywood studio might envision marketing confusion down the road and select the next title option.

Does this mean that documentarians should feel free to pluck any Hollywood title for their own project? No. The MPAA does have a Title Registration Bureau, which basically is a repository for titles and the source of an unwritten agreement that any MPAA member will refrain from using a title in the registry. (This fouled up Harvey Weinstein’s plans to call his Forest Whitaker project The Butler, because a silent film in the TRB had that name. Hence: Lee Daniels’ The Butler.)

Recycling a title might be an invitation for litigation, even if the recycler ultimately prevails. (See ﻿Rin Tin Tin, Inc. v. First Look Studios, Inc., 671 F. Supp. 2d 893 (S.D. Tex. 2009) (holding that the film title Finding Rin Tin Tin: The Adventure Continues was fair use of the Rin Tin Tin trademark).) There are colorable arguments to be made that reusing a title runs afoul of state unfair competition laws, deceptive business practices and other torts, aside from trademark actions – so choosing a preexisting title could be risky for the recycler.