Chris Hegedus and D.A. Pennebaker, the documentary duo behind films like The War Room and Startup.com, are in the process of documenting what could be a landmark legal battle for animal rights.

The work-in-progress, Unlocking the Cage, follows attorney Steven Wise as he tries to get New York state courts to recognize “personhood” rights for chimpanzees. (For much more background on the lawsuit, see this recent New York Times Magazine article.)

Documenting a legal story is a new challenge for the veteran filmmakers, who commonly find their subjects in the arts — music (Dont Look Back, Monterey Pop, Only the Strong Survive), theater (Moon Over Broadway, Elaine Stritch at Liberty), cooking (Kings of Pastry) — or politics (The War Room, Al Franken: God Spoke, Town Bloody Hall).

I caught up with Hegedus and Pennebaker recently in a phone call to their Manhattan office to discuss the challenges of creating a legal documentary.

One of their biggest challenges has been the unpredictability and slow pace of the litigation process. One might think that the filmmakers, with decades of experience working mostly in a vérité style, would be used to stories that unfold unexpectedly and haltingly. But it’s different when working within the courts, they say. “Usually it’s fate that determines the story,” Pennebaker observes. “Here, it’s the legal system.”

For example, Hegedus describes the frustration and helplessness she felt when one state-court judge surprisingly held an important unscheduled hearing before the filmmakers had received permission to film in court. “It’s difficult as a filmmaker to sit and watch” from the gallery, she says. They have since secured permission to film the proceedings slated for the appellate court this fall.

I asked the filmmakers if they were concerned about the recent cases involving Crude, directed by Joe Berlinger, and The Central Park Five, directed by Ken & Sarah Burns and David McMahon, where the filmmakers were subpoenaed for their outtakes by the litigation opponents of their main subjects. Hegedus said that they were certainly aware of both situations. “It’s scary precedent,” she says of the Berlinger case. But they haven’t taken any extra measures to try to protect their footage from subpoena, nor do they have any special agreement in place with Wise (aside from the customary releases). “It’s a relationship built on trust,” she says, adding that she doesn’t know how anyone could use their footage against Wise in court. 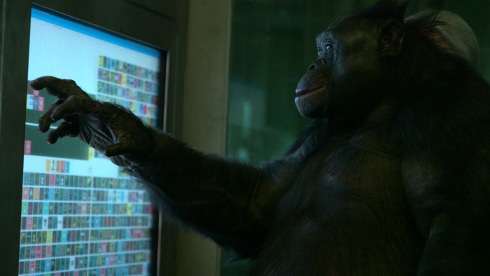 One problem the filmmakers don’t seem to have is finding drama outside of the courtroom. Both Hegedus and Pennebaker are effusive about the abilities of chimps, and simply watching the animals perform cognitive tests is engrossing. It’s a visual and emotional hook that most legal documentaries don’t have. And the story has already taken many turns. Hegedus described the dramatic shift in Wise’s legal strategy and focus over the years from elephants to chimps, the impact of the death of a chimp who was to be the primary subject of the suit, and the difficult process of trying to select a replacement. Building scenes and a narrative arc out of this material will be a familiar challenge for the filmmakers.

Hegedus says they didn’t bring any strongly held beliefs on animal rights to the project and aren’t looking to lead any animal rights movements. Both she and Pennebaker were animal lovers, but they admit they knew little about animal rights or the ins and outs of precedent-setting litigation before they met Wise three years ago. Wise’s passion for his mission and his desire to use the law in creative ways compelled them to document his story. (In passion and ambition, Wise fits naturally into the group of past Hegedus/Pennebaker subjects like James Carville, Bob Dylan, Norman Mailer, John DeLorean, and others.)

Pennebaker, who at age 88 is the only documentarian ever to be given an honorary Oscar, says his personal interest in the law goes back to at least his undergraduate days, as an engineering student at Yale. His dorm was near the Yale Law School and he occasionally took in some moot court arguments. The lawyers seemed to be having more fun than the engineers, he recalls. “But it was too late,” Pennebaker says. “I was an engineer.”

Hegedus says she’s curious to study other documentaries about the law, including The Case Against 8, which is about the effort to overturn California’s ban on same-sex marriage, to pick up tricks for telling a legal story in a way that has narrative and emotional drive. She acknowledges that some of the finer points of animal law will be lost in the documentary – it’s not a law review article, after all – but she hopes the film will force audiences to confront some of the novel legal concepts, regardless of whether Wise wins his case.

The most immediate concern for the filmmakers is money. Hegedus and Pennebaker are trying to raise $75,000 on Kickstarter, in part to pay for animation to depict court scenes they were unable to film, and in part to cover basic production costs for a film that is already three years in the making. (As of this writing, they need to raise about $25,000 in 10 days to reach their goal.) Hegedus and Pennebaker hope to work with scientists from all over the world who are contributing to the legal effort, and to film Wise in multiple appearances before the appellate court.

(Disclosure: in college, I took a documentary workshop class taught by Hegedus and Pennebaker, and have made a small pledge in support of their Kickstarter campaign. –TI)