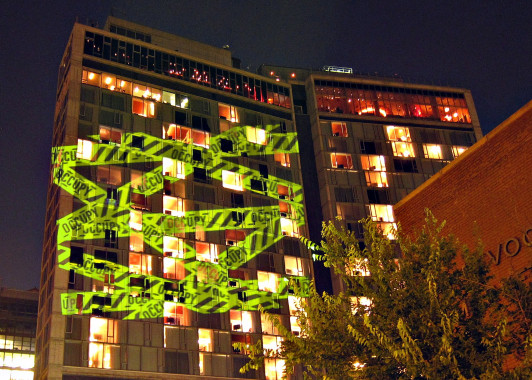 "The Illuminator" at Occupy Wall Street

In October 2013, the Penn Program on Documentaries & the Law held a Visual Legal Advocacy Roundtable on “Preparing to Protest.”  This is the second of three posts on the Roundtable.

According to activist and NYU media instructor Mark Read one of the speakers,” “visual culture is on the frontline of the struggle for a more just and sustainable world.”  Where political struggle is partially fought on a terrain of “signs, symbols, story and spectacle,” activist artists, trying to beat the marketers and propagandists at their own game, have become symbolic warriors attempting to disrupt the existing power structure with more effective images.   Their capacity to turn the received reading of signs and symbols on their head in an organic, lived way is the crux of effective creative cultural resistance.  May the spectacle be with you!

In the attention economy, what goes viral matters.  Given complete information saturation, what kinds of visual artifacts of resistance attract such attention?  Mark Read and Marwan Kraidy offer two suggestions.  Mark’s talk is entitled “Utilizing the Spectacle: ‘The Illuminator’ and Imagery for Social Change.”   In it he argues that authenticity is compelling, which is why ad men and marketers are always trying to “plumb the real,” and so is genuine risk-taking—“risk of bodily injury, risk of ridicule, risk of arrest and prison”—“for the joy of it or for a cause.”  This is where the symbolic warriors are “strong,” “deep,” and “resilient” and the opposition is “weak” and “brittle.”  Take “The Illuminator” for example.  It is a high-powered projector that throws light in the form of political messages on buildings.   It creates a beautiful spectacle that is charged because it is a literal or figurative trespass.  Activists do not need to be experts to do this kind of creative direct action.  DIY tools that are “scrappy” and authentically “of the people” work just fine. 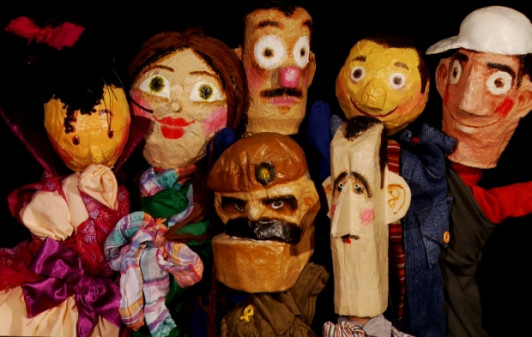 The Cast of :Top Goon: Diaries of a Little Dictator"

In “Visuals of Dissent: The Middle East and Activist Imagery,” Marwan Kraidy of Penn’s Annenberg School discusses his analysis of the efficacy and moral resonance of activist artifacts in the Middle East.  He has found numerous examples of protest art that simultaneously appeals to two audiences, one that is local and domestic and a second that consists of global decisionmakers.  To reach both (with the assistance of international social media), activists graft a local message onto imagery that resonates with global popular culture.  This is done with simple cardboard posters made with colored markers and with low-cost, high-impact videos that circulate well.  An example of the latter is “Top Goon: Diaries of a Little Dictator,” a video series by the collective Marasit Mitu featuring finger puppets of Bashir al-Assad and other figures connected with the conflict in Syria.  With a nod to Western movie icons Tom Cruise and Charlie Chaplin in the title, the video series lasted two sessions; it can be found with subtitles on YouTube and Vimeo.  Though a foreign audience may not completely understand the details, it can get the point.  The videos were easy to shoot, the creators controlled the message, and their work achieved global acclaim.  The question is did they attract new adherents to the cause or “mobilize and sustain those who had a preexisting commitment” through a dark time.

The effective use of visual digital technology by social justice artistic activists may depend on the extent to which their use of technology enables and respects the social interactions that unite protestors and dissenters in common cause.   The protesters and dissenters may be both the subjects of and the audience for visual media organizing and activism.  Use of the Internet and digital visual technology without a supporting “technology” for creating and supporting social connections will not sustain a movement.  This is the message of several of the Roundtable contributors. 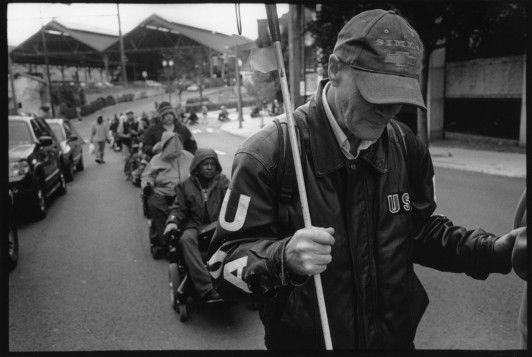 Documentary still photographer Harvey Finkle showed images of protests by Disabled in Action and the Kensington Welfare Rights Union (which morphed into the Poor People’s Economic Human Rights Campaign) to explain his “work ethic.”  His photographs benefit from his long-term relationships with the activists.  He describes being “embedded” in the positive sense of the word with them.  He knows them and they know and trust him.  This allows him to capture with sensitivity the feelings and the positive aspects of the people he photographs.  It allows him to get close enough to take a picture when the person seems comfortable with that.  He gives the groups whatever images he prints to use for their own purposes. 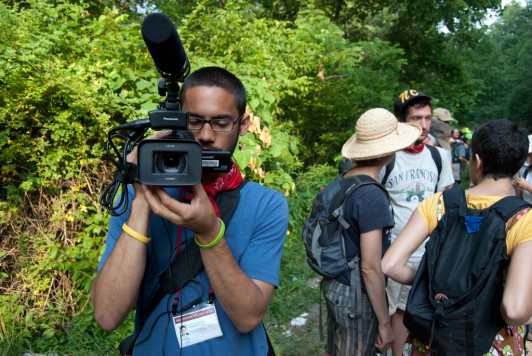 Zein at the March on Blair Mountain by beelaineo on Flickr

Zein Nakhoda also focused on the connection between visual technology and social interaction.  He shot, edited, and directed a documentary short, “Marchers on Blair Mountain,” which follows a five-day trek through West Virginia coal country protesting the destruction of Blair Mountain by mountaintop removal.  Zein describes the process by which the media makers observing and participating in the march convened each night to discuss the footage shot that day, decide what should be exchanged or what should not be used, and agree on what events and interviews needed to be captured the next day and who would do it.  The collaboration between local and visiting media makers mediated the impact of technology on the community of marchers by creating a culture around consent and permission.  The results satisfied the criteria described by Milena Velis of Media Mobilizing Project in her Roundtable talk:  stories that viewers can see themselves in; that disrupt divisive narratives, myths, and stereotypes; and that aim to build community, not just target audiences. 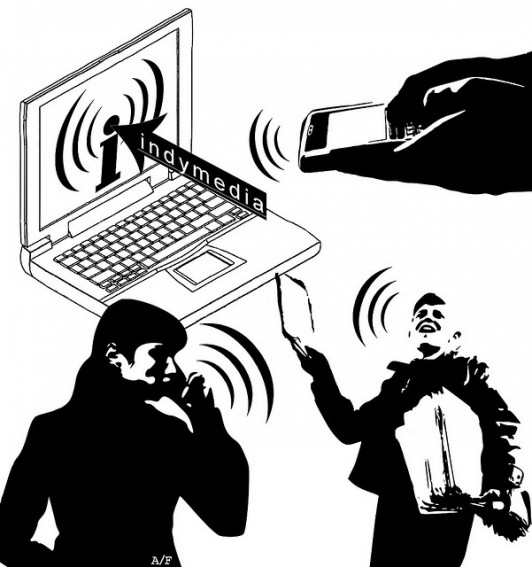 Media Mobilizing Project co-founder and academic Todd Wolfson traced the origins of the role of the Internet plays in media organizing to the Zapatistas and the Indymedia Center.   They prefigured the citizen journalism that is prevalent today.  Moving stories across borders over an international network and knitting together disparate struggles were among the breakthroughs they achieved.  However, they also left a legacy of pitfalls that mark contemporary cybernetic organizing and activism, as illustrated by the Occupy Movement.  The Indymedia leadership had a general tendency to be overly technologically deterministic and utopian, a manifestation in Todd’s view of its class position.  It was not “in struggle,” but rather working “on struggle.”  It thought that slick coding and a strong website were the answer to building a movement, not cementing grounded social relationships.  Furthermore, it prioritized global struggles over local struggles.  As a result, it lacked the means to engage the mass of social movements in its activism.  Todd urges tech-focused activists to take advantage of the independent media infrastructure which in Philadelphia includes organizations like MMP, public access station PhillyCAM, and Scribe Video Center, a community-focused media arts organization that trains groups and young people to make their own videos.