Three lawyers spoke at the Visual Legal Advocacy Roundtable on “Preparing to Protest.”  Although they practice three different kinds of law (criminal defense, civil liberties, and international human rights), each in her or his own way plays a supporting role in protecting and assisting those who interact with digital media technology as they protest injustice.  Three hypotheticals make the distinctive roles of the speakers clear.

Ordinary citizens take out their cellphones to capture police officers abusing their power by brutally assaulting and arresting a person justifiably objecting to the officers’ treatment of him.  The police turn on the “spontaneous protesters” and go after their phones.  Can the police get away with that?

Criminal defense lawyer Larry Krasner has represented innumerable protesters after they have been arrested and sometimes (hypothetically) before.  In his view, the cellphone “is the most egalitarian, most democratic evidence-gathering device that the ordinary person has ever had” “to pull away the curtain” and capture “the brutality, false arrests, and crushing of rights” that are really occurring on the streets.  When officers attempt to confiscate or destroy cellphones and the evidence they contain, they are illegally obstructing justice.  To see and hear all of what Larry Krasner said and showed, check out “The Mousetrap: Cellphone Videography as Spontaneous Protest.”  During his talk, Larry showed both of the YouTube videos of the arrest of Philadelphian Askia Sabur who was acquitted of charges of aggravated assault of a police officer and resisting arrest.  Sabur spent two years in jail awaiting trial.

A civil liberties lawyer considers publicizing the harm done to a client because the court of public opinion is the only forum available.  The infringement of the client’s rights, however, may grow worse.  What’s a lawyer to do?

This is the sort of situation that confronts Mary Catherine Roper of the American Civil Liberties Union of Pennsylvania.  There are many others like it.  Can activists record themselves and others who participate in or are merely present at protests, yet seek to bar the state from conducting video surveillance of the same folks?  Can information collected for the purpose of monitoring police stops be managed and protected from discovery by the state?  In “Caught on Tape: Dissent, Media Impact and Ethics,” Mary Catherine considers these and other paradoxical situations that arise from, on the one hand, trying to protect clients from social media and digital technology while, on the other hand, seeking to preserve their right to pursue social justice by inviting the attention of social media or utilizing digital technology.  She suggests that there are no easy answers to these questions. 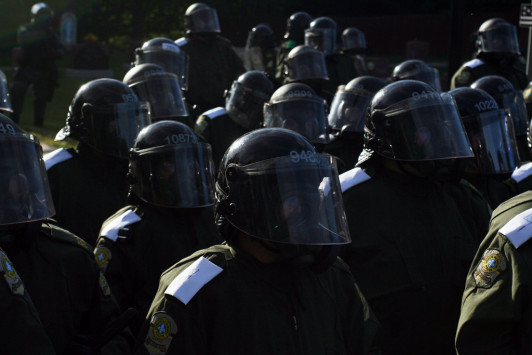 The artist activist with a video camera knows that in 10 minutes the police or the military forces amassing on the sidelines will fire teargas into the crowd of protesters.  What images should the activist capture first?

Kelly Matheson is an attorney, filmmaker, and project director at WITNESS, the international human rights organization that puts cameras in the hands of activists around the world.  Some of the activists she works with are putting their lives on the line; others are not.  Kelly focused on logistics or what a video activist should consider before going into the field.   Tip #1: Figure out what the goal is:  why you are filming, what you should capture, and even whether video the best use of your time and money.  Tip #2:  Where possible, film for the purpose of achieving long-term justice and accountability rather than just the immediate cessation of human rights abuses and media advocacy.  The audiences (courts of law versus international political decisionmakers) and standards of proof which the footage must satisfy (beyond a reasonable doubt versus reasonable grounds to believe that a violation of rights has occurred) are different.   Tip #3: “Set up a safety and security plan ahead of time.”  For more information, see Kelly’s talk and the 5-part video series on “Filming Protests for Evidence” on the WITNESS website.