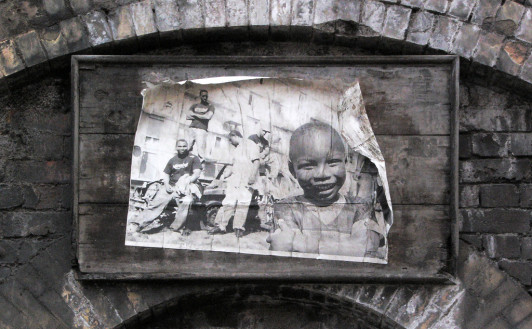 It might be said that guest blogger Amber Baylor has spent most of her legal career on the frontlines of the criminal justice system as a member of Gideon’s Army.  For five years, she was a staff attorney at Neighborhood Defender Service of Harlem, a community-based public defense office in NYC.  Before that she was a trial attorney with the Federal Defenders of San Diego.  A graduate of Columbia University and NYU Law School, Amber is presently a clinical teaching fellow and supervising attorney at The Community Justice Project of Georgetown Law School.  Her post speaks to her use of sentencing mitigation videos, the subject of a previous post.

A large picture of Steven Davis’s kindergarten graduation is affixed high in the center of his mother’s bedroom wall.[i]  From it radiate other tacked on mementos and photos. One photo shows a boy, sans front teeth, and his mother, posed in a portrait studio.  Her relaxed hair is flipped back like an oncoming wave. Her arms, draped in gauzy disco blue sleeves, are wrapped around her son.

My colleague and I scan the apartment walls with a low tech camera.  Not a proper microphone-attached camera, but a meant-for-photos digital camera, set to video.  We are two public defense attorneys, representing Steven, a twenty-one year old locked up at Riker’s Island awaiting trial on a burglary charge.  We are desperately trying to give the prosecutor a view into Steve’s life in order to encourage a better plea deal.  His mother has opened up her apartment to us, and escorted us to the back room where she keeps her papers. Since Steve is in jail, she is the only one who can tell his history as it is reflected in their home.

A central frustration for public defense attorneys is that prosecutors tend to shy away from acknowledging the humanity of the people they charge.  Maybe it’s a mental partition necessary when representing an entity like the state against real people.  Over my years as a public defender, I found myself also making sweeping, lazy denunciations of a group of folks … namely, prosecutors.  I labeled them immoveable, blind to context, and enmeshed in a false binary of victim and predator.

In deciding to video record parts of Steve’s life, I had to mentally re-cast our adversaries as people we can move.  For eons, defense attorneys have been writing letters to prosecutors and judges, detailing the obstacles and tragedies in the lives of people in the system, and begging for good deals to resolve cases.  The pretrial offer in Steven’s case was for a large amount of time in prison.  Was there any sort of legal document that we could create about Steven that a prosecutor would not file away? We realized that videos are the way we could tell compelling modern stories.

On Steven’s behalf, we recorded the video history with his mother, Ms. Davis.  It was attached to a written report compiled with our office’s social worker. My first foray into video interviews opened up a new world of advocacy.  Here are four things I learned:

1. Elements, that seem overwrought in a letter to a prosecutor, seem “just are” in a video.

In the cramped back room of the apartment, Ms. Davis sits on her bed and responds to questions.  She recounts conversationally and in detail pivotal moments in their lives –from the intense emotions and abuse of her first marriage, to her escape with her baby boy 16 years ago. They left her husband and moved into this very apartment with her niece.

If we were to attempt to capture these moments in a letter, it would say:  “Steven’s father was abusive.” “Steven grew up in a crowded, shared apartment in a housing project.”  “He has a loving, supportive mother, and he is a good son.”

On video, one can see Ms. Davis’ love for her son wallpapered across the room.  Sun bleached documents, like his HIV/AIDS junior counselor certification, are permanently mounted on the heavy cement brick wall.  The room itself tells a story. The window looks out on two identical tall, hard brick buildings.  A baby cries in another room in the apartment.  Mother’s Day cards are carefully saved. Ms. Davis reads out excerpts that are sweet and charming.  We don’t have to rely on a line like “Steven’s family misses him very much.”

2.  Asking the right questions and listening to where the interviewee takes you can reveal the unexpected.

Before we go to Ms. Davis’ home, we prepare questions based upon the file.  Questions like “What happened when he switched schools in ’01.”  We also try to construct reflective questions that probe the unknowns.  “What is one of the best things about having Steven as a son?” We follow with “Tell us about a time when he did that.”

Initially, I have a vision of what information will be shared on the video.  The sound bites I want are hard to get.  Every time we go over questions, his mother takes a new and tangential path to her answer.  Finally, I let go and follow her through the seeming non sequiturs.  And we learn important things. To us, Steven was a friendly and talkative guy.  His mother delves into an unknown side of him,- as she describes the deterioration of his mental health and deep anguish he feels from being locked away in jail.

I knew before recording that I wanted the video to reveal a promising, good-spirited Steven. There was a more complex, but even more sympathetic, side to Steven that we did not anticipate.

3.  A video can be done without compromising the criminal case.

We ask no questions about the case.  Factors that may have led to Steven’s arrest are approached in in terms of Steven’s trajectory from boy to man.  Ms. Davis focuses on things like discovering his learning disability.  She laughs about Steve’s jokes, such as his telling his nutty girlfriends to call her “mom” much to her chagrin.  Barbed official words like “indictment,” “charge,” and “defense” are legal concepts distinct from the things Ms. Davis knows best, i.e.,  where she and her son come from.

4.  We need more resources and training in visual legal advocacy.

We have more tools at our disposal today to tell these stories (even non-profit law offices like mine have digital video cameras).  Investigators and attorneys can benefit from training in shooting and editing compelling life history videos.  Proper training could have helped us avoid basic errors – like forgetting to bring a charger for the camera.  We also did very little editing of the video – luckily the prosecutor on the case was curious enough to sit through the footage.

Videos can help us advocate for clients before trial. In Steve’s case, the amount of time offered was halved.  Steve accepted the new plea; it still required unnecessary prison time, but it was a better option for him.

A peek into someone’s life may convince a prosecutor that while jail is right for the unknown monster she or he is prosecuting, it may do irreparable harm to the vulnerable person revealed on the screen. Videos for pretrial plea negotiations can capture the complex family relationships, failures of the system, and great potential of people charged by the state.  They can show where this particular unique, overcoming, succumbing individual in front of you comes from, and where “we” – “the advocates” – are coming from when we say this person deserves leniency.

[i] Name and minor details of charge and personal history are changed.