“Get Digi With It”: AUDIOVISUAL TECHNOLOGY’S CHALLENGE TO RESTRICTIONS ON RECORDING IN PENNSYLVANIA PRISONS 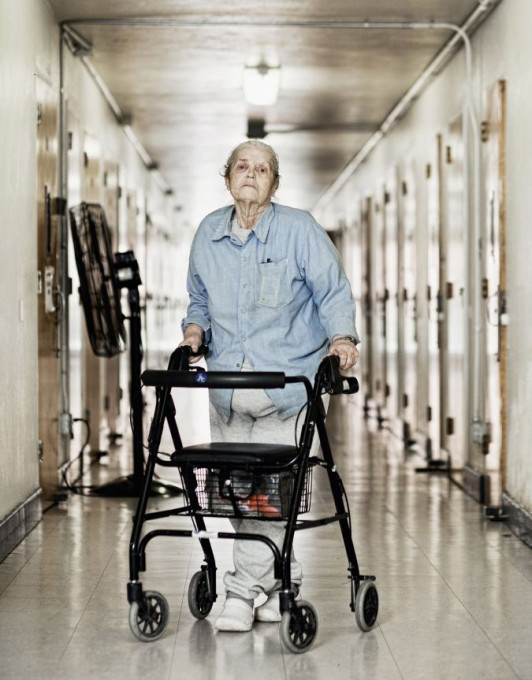 I was lucky enough to be able to spend a day at “Marking Time: Prison Arts and Activism Conference,” which was organized and hosted by the Institute for Research on Women at Rutgers University New Brunswick, NJ.  All manner of art being pursued and performed by and about persons in jails and prisons was on display and under discussion.  There were even still photographs and videos in which the faces of incarcerated individuals were visible and identifiable.  Imagine that!  Of course, these people were not confined by the Commonwealth of Pennsylvania!

I was at “Marking Time” for a panel on the Pennsylvania Department of Corrections’ ban on the use of recording devices in its facilities.  As a general matter, visitors, the news media, and lawyers are treated all the same and none of them is allowed to bring recording devices into a state prison.  Imagine in this day and age restricting a lawyer to the use of a legal pad and pen when interviewing an incarcerated client.

Exceptions to recording are made when consistent with the PA DOC policy that “encourages highlighting” the various programs and events that it runs.  Even then, “[a]t no time may an inmate’s face or identifiable scars, marks and/or tattoos” be captured. “Filming and/or photography must be done in a way so that inmates cannot be recognized – meaning, but not limited to, being photographed from a distance, being blurred, of lower body area only, of feet only, from behind, etc.”  The regulations indicate that this restriction “is done out of respect and concern for crime victims, as it is the Department’s intent that none of them shall be traumatized by seeing the image of the inmate in the news media.”  Furthermore, only the first name of specific inmates may be used, and “[a]t no time will the inmate discuss the specifics of his/her crime.”

In 1989, the Pennsylvania Prison Society made a video called “Life Sentence”  that was broadcast on Philadelphia’s public television station WHYY.  My fellow panelist Ann Schwatzman, Executive Director of the Pennsylvania Prison Society was its associate producer.  “Life Sentence” was shot inside prison facilities and included footage of groups of identifiable male and female lifers, members of the general population in cellblocks, and inmates in classes, workshops, and meetings.  There were also interviews with individual female and male lifers.  The purpose of the video was to support the pardon petitions of dozens of exemplary inmates whose requests for commutation had been turned down by Democratic Governor Bob Casey despite favorable recommendations by the Board of Pardons.  As Ann explained to the audience, this film could not be made today under the current PA DOC regulations.

In 2006, when I started teaching visual legal advocacy at Penn Law, I wrote the then head of the PA Department of Corrections about doing a project with Pennsylvania’s nation-leading number of juvenile lifers.  At the time we were particularly interested in working with the oldest juvenile lifer who has been in prison since the mid-1950s.  I explained that we wanted to “develop templates or models for video clemency petitions for pardon seekers.”  I borrowed the idea from the video clemency petitions of death row defendants that I am still collecting and analyzing.  I continued:

“There is much about them that suggests the usefulness of a video petition in other kinds of cases as well. The ability to tell their clemency story orally and on film will be especially valuable for inmates who have limited literacy skills; who do not speak or write in English and therefore require translation services; and who, for health reasons (both physical and mental), may find producing a written petition arduous or impossible. Video petitions will also be useful in soliciting the support of the families of victims and members of the community to which the pardoned inmate might return.”

The request was turned down.

Security and community sensitivities are generally invoked as justifications for bans like Pennsylvania’s.  I had assumed that safety was principally a problem during recording and that it was the actual presence of the camera that created tensions.  The case law, however, suggests that prison authorities are worried about the competition or jockeying over status within the population that occurs after the recording is done.  It is argued that filming some prisoners provokes jealousy, conflict, and violence from the others.  The courts are also concerned with creating inmate celebrities.  I wonder what prison ethnographers would make of this reasoning. 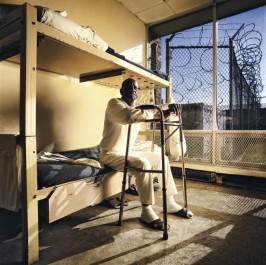 "Tex Johnson, 60" Courtesy of Ron Levine from the "Marking Time" Press KitCommunity sentiment is clearly significant to penal policy in Pennsylvania.  Public reaction to two documentary films (one by HBO about a well-known Pennsylvania prisoner and the other by VH1 focusing on a heavy mental prison band that included a prisoner convicted of two murders) is at least a partial explanation for the restrictions that bar the recording of faces, other identifiable features, and names.  Indeed, in response to my inquiry, the then Secretary of Corrections addressed the issue:

“Decision-making related to the denial or approval of such proposals fully considers the myriad of factors associated with each specific request, anticipating any unintended consequences which may result from the process and final product.  As one example, the potential for community sensitivity associated with any release of the content to the general public, or any use beyond the work’s intended purposes/target, is always a primary concern… . [T]he Department of Corrections is invested in upholding the rights, and respecting the interests, of all Commonwealth citizens, including not only lifers under state jurisdiction, but also the families of their victims.”

These justifications certainly warrant greater legal analysis than I can give them here.  Then too, on the other side, there is the question of whether persons confined in PA DOC facilities have rights guaranteed by the First Amendment and the Due Process Clause to use audiovisual technology to gain access to the courts or to make appeals to the government directly or through the media.

Nonetheless, it seems undeniably true that the impact of the PA DOC ban on recording in its facilities, at least where lawyers and the media are concerned, has grown more onerous with advances in audiovisual digital technology.  The ban is simply antiquarian.  Cell phones, tablets, laptops, digital cameras, and digital audio recorders are standard operating tools for the busy legal advocate and reporter.  These devices are portable, easy to use, and increase productivity.  The ABA Criminal Justice Standards on Treatment of Prisoners (approved in 2010) say that “correctional authorities should allow professionally accredited journalists reasonable use of notebooks, writing implements, video and still cameras, and audio recorders.” The ban is also disparately impacting the efficiency of the legal representation provided persons incarcerated in Pennsylvania facilities.

Indeed, the ban ignores trends in the use of visual legal advocacy by lawyers in connection with sentencing-related proceedings and options.  Visual legal advocacy is the presentation of facts and persuasive argument, undertaken by lawyers to advance the interests of their clients, that utilizes digital visual technology.  The Penn Program on Documentaries & the Law has identified five areas related to sentences that are, and might effectively be, the subject of visual legal advocacy:  victim impact; sentencing mitigation; actual innocence; clemency, pardon or commutation; and proof of rehabilitation by persons with a criminal background battling employment discrimination and other post-conviction collateral consequences.  These videos are used in courts, in quasi-judicial settings like clemency or commutation hearings, and in appeals to executive and legislative decisionmakers and the public.  Legal changes with regard to the imposition of the death penalty and LWOP for juvenile offenders and federal efforts to mitigate lengthy drug sentences that have resulted in mass incarceration for people of color are opening up the opportunities where sentence-related visual legal advocacy can be efficiently and effectively employed.  The inability to record in Pennsylvania prisons means that visual legal advocacy cannot be offered on behalf of the most invisible segment of the prison population: persons incarcerated as juveniles who have served long terms in prison because of LWOP sentences.

Apart from any other reasons, then, advances in technology would appear to have outstripped the acceptability of PA DOC‘s total ban on the recording of verbal content and images of individual prisoners.  It is time for the PA DOC to get with the digital revolution.