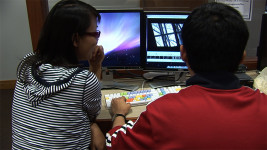 On Friday, October 24, 2014, a small group of law professors, lecturers, and law students met in a conference room at Penn Law School to talk about the production of visual advocacy and scholarship (“PVAS”) in law schools.   It was the first meeting of the PVAS Working Group and we were excited to exchange information about using and/or teaching video production as a tool of legal advocacy and scholarship.

There is a surprising amount of video advocacy and scholarship training and production actually being done in law schools.  Moreover, some of the work is readily accessible online.

The programs differ in terms of the extent of student involvement.  For example, students enrolled in my Visual Legal Advocacy Seminar make short advocacy videos which can be found on the website of the Penn Program on Documentaries and the Law and on YouTube.  The subjects range from recreational discrimination to criminal court debt to the shackling of female prisoners during childbirth.  The University of Miami Center for Ethics and Public Service has a number of oral history documentaries available on its homepage.  Yale Law students connected with the extracurricular Yale Visual Law Project have produced three documentary shorts that can be found online.  The films consider New York City’s “stop-&-frisk” policy, immigration raids, and Connecticut’s supermax prison.  Documentary filmmaker and Harvard Law lecturer Rebecca Richman Cohen produced, with the help the HLS Cyber Law Clinic, the New York Times Op-Doc “The Fight over Medical Marijuana.”

Faculty members also have independently undertaken projects grounded in academic research.  For example, “The Memphis 13,” a work of visual legal scholarship produced and directed by Professor Daniel Kiel of the University of Memphis, tells the story of the first-graders who integrated the Memphis public schools.  Bernadette Atuahene of Chicago-Kent Law School, the author of the book We Want What’s Ours: Learning from South Africa’s Land Restitution Program, has produced a companion documentary short entitled “Sifuna Okwethu (We Want What’s Ours)” that focuses on one land dispute that pits two black families against each other. The trailer is available online.

The discussion that took place that day was provocative, though preliminary.  There was a shared consensus that in the future the skillful and effective utilization of audiovisual digital media will be a measure of lawyer competency.   Law schools should begin to offer media skills training to enable their graduates not only to advocate on behalf of their clients, but also to perform their ethical obligation to translate the complexities of the law for lay audiences and to promote greater understanding of and accountability by legal institutions, including the profession.  In addition, participants exchanged practical information about how courses involving video production might best be structured and how visual legal scholarship by faculty might best be undertaken, distributed, and evaluated.   We ended the meeting with a long list of agenda item for future meetings.

We made a short video of highlights of the first meeting of the PVAS Working Group.


We look forward to hearing from others in law schools who may be involved in the production of visual advocacy and scholarship.  If you are, please contact Professor Daniel Kiel at dkiel@memphis.edu.