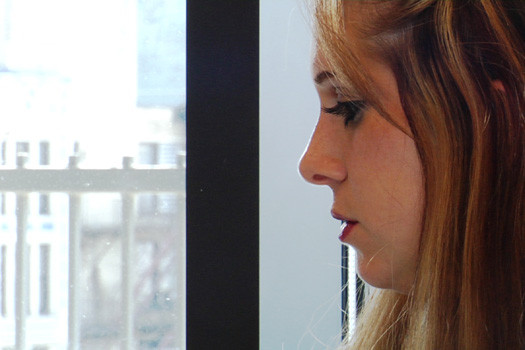 “A Civil Remedy” is a short film that introduces the viewer to sex trafficking in the American context through the story of “Danielle,” a young woman who was victimized when she was a 17-year-old college freshman; she is now a college graduate, mother, and anti-trafficking opponent.  Supplemented by interviews with Gloria Steinem, Alicia Foley, Founder of BITAHR (the Boston Initiative to Advance Human Rights), and Siddharth Kara, author of Sex Trafficking: Inside the Business of Modern Slavery, the film delves into the emotional and physical vulnerability of the females who are labeled “prostitutes” when they are actually “rape victims”; the enormous profitability of trafficking; the inequities of a justice system that barely punishes male pimps and johns, or profiteers that facilitate trafficking; and the need for effective civil damage actions for survivors.

“A Civil Remedy” was directed and produced by Kate Nace Day, professor emerita of Suffolk Law School in Boston, MA.  I asked her about the backstory behind “A Civil Remedy.”

According to your account in the article “’Just Trying to Be Human in This Place,’ Too: From Inside the Law School Classroom to Filmandlaw.Com,” which is published in the Virginia Journal of Social Policy and the Law, you first became interested in sex trafficking after some of your students screened a documentary on the subject during one of your classes.  You went on to watch and analyze similar documentaries.  You even organized a film festival on sex trafficking.  Why did you feel the need to make a documentary of your own?

The power of sex trafficking documentaries – to tell the stories and expose sexual violations – revealed itself to me time and again.  The films present survivors as their own storytellers, often as activists in civil society combating sex trafficking. Many films also do the important work of exposing state actors and state impunity. Few, however, offer any explicit discussion of the role of law or offer a vision of justice for survivors.

I felt the need for a survivor’s story and surrounding commentary that envisioned sex trafficking survivors hiring lawyers, participating in constructing their stories, and then telling their stories as to law, as social and legal equals. That’s a civil remedy as a vision of justice.

How did your research and analysis of other documentaries about sex trafficking impact your own documentary?

The theory required a methodology, an analytical model that was drawn from the history of women’s human rights struggles and contemporary feminist critiques of national behavior through law. This methodology – in its breadth and depth – was at the foundation of the film, from my approach to interviewing Danielle to my role in the editing room.

You began collaborating with Alicia Foley of BITHAR to get an anti-trafficking law passed in Massachusetts in 2011.  How did your film work impact your advocacy?

Until 2010, I thought of myself as a law teacher searching for better ways to teach. Documentary as a form of communication and sex trafficking as subject became my work. When I found myself in a position to advocate for the inclusion of a civil remedy in law, it was impossible for me to imagine engaging with the subject without working within the form.

In terms of the impact of making the film on my advocacy, this is purely speculative on my part, but I think the greatest impact was access.  If I had been writing a traditional law review article, I don’t think I would have been asked to meetings with the Chair of the Joint Committee on the Judiciary or Massachusetts Attorney General Martha Coakley’s staff.

Can you describe your relationship with Danielle, your on-camera storyteller, who seems like a very strong and forthright survivor of trafficking?

Our cinematographer and filmmaker in her own right, Kat Rohrer, knew Danielle and got word to her about what we were doing. Danielle liked the film’s call for law reform and civil justice.  She likes the film, and she is everything you describe.

In the time it took to complete filming, Massachusetts passed a strong anti-trafficking law with a civil remedy provision. Did you realize how long it would take to complete the documentary?

No (with laughter). I had no idea that it would be years.

How has the film been used since passage of the Massachusetts law?

Since the passage of the Massachusetts law, we’ve used the trailer, fine cuts and the finished film to educate students in law schools, universities and college classrooms. Professional organizations like the Boston Bar Association and the Massachusetts Academy of Trial Attorneys have invited us to screen the film to educate attorneys about the issue and the civil remedy provision. Finally, and most recently, we screened the film at a public library as part of our community activism on behalf of our new project, “Without Consent.”  The new project also involves documentary and stories of sex trafficking.

“A Civil Remedy” was completed in March 2014. Six months later, the Boston law firm of Ropes and Gray filed a pro bono suit against Backpage.com on behalf of three girls, each of whom alleged that she was trafficked on the site.  That lawsuit has been dismissed because of a provision in Communications Decency Act (CDA) of 1996, 47 U.S.C. § 230, which immunizes websites from liability based on “user-content.”  What is next for the campaign to secure compensation for the victims of sex trafficking?

One step is to increase the number of states that provide civil remedies for survivors. Currently, thirty-five states and the District of Columbia specifically allow for survivors to sue their violators. Recently, the Uniform Law Commission (ULC) released a Uniform Act on the Prevention of and Remedies for Human Trafficking (Uniform Act), which includes a section on civil remedy.

Holding the full line-up of perpetrators – pimps, purchasers and profiteers – accountable involves a social, political and legal process. In May, President Obama signed the Justice for Victims of Trafficking Act of 2015 which includes an amendment to the Trafficking Victims Protection Act, section 1591 of title 18, United States Code, that makes it clear that those who purchase sexual acts from human trafficking victims may be prosecuted as sex trafficking offenders and held liable to their victims in civil suits.

As we saw in the Ropes and Gray suit, further steps need to be taken before Internet profiteers will be held accountable in law.  For almost a decade, state attorneys general have called upon Congress to amend Section 230 of the CDA so that Internet providers enjoy no immunity. While they have been unsuccessful to date, social and political views are changing. Two weeks ago, Master Card and Visa announced that they were joining American Express and will no longer do business with Backpage.com.  MasterCard cited among its reasons the request from Cook County Sheriff Thomas Dart who is also calling for law reform of Section 230.  That’s the next big step.

You write about documentaries and you supervise law students involved in video projects.  What would you say were the benefits of your work on “A Civil Remedy” in terms of your teaching and scholarship?

“A Civil Remedy” has its roots in years of experimenting with film to subvert law’s traditional pedagogy and create a more open and inspiring experience in the law school classroom. Everything I learned in filmmaking was brought back to my students, in their space and for their projects. For example, after I experienced the analytical and artistic demands of editing, I re-structured the required student projects along the lines of the New York Times Op- Docs to give them creative latitude and a full range of styles and subjects, but I also require that their submissions be no longer than seven minutes. I forced them into the editing room with all its challenges because I knew how much they would learn – about visual storytelling, their subjects, their arguments, and themselves.

In terms of my own scholarship, it is too soon to say.

What advice would you give to other law faculty and students thinking of embarking on an advocacy video project?

Envision yourself doing it as real work, with dignity and hope. Learn what you need to begin and just do it.  Then, be prepared for it to change your life.

In 2014, “A Civil Remedy” won the National Women’s Political Caucus’ Exceptional Merit in Media Award – an EMMA – and the Media Award of The Massachusetts Academy of Trial Attorneys. The film was an Official Selection of the 17th United Nations Association Film Festival, the 2014 Council of Social Work Education Film Festival, and the 2015 Through Her Eyes Only and Sarasota Film Festivals.  The film is the first full production of Film and Law Productions, a small production company founded by Kate Nace Day and her husband Russ Murphy.  “A Civil Remedy” is available for purchase through Berkeley Media at http://bit.ly/1vR5bSb.