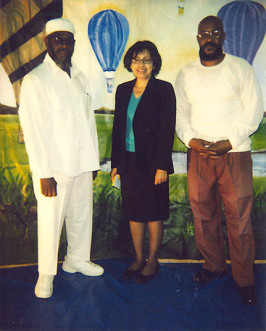 When I realized that the Pennsylvania Department of Corrections absolutely barred filming or photographing the faces of the residents of its facilities, I gave up on the idea of my students making videos about the state’s large population of aging juvenile lifers, i.e., persons convicted while juveniles and sentenced to life without possibility of parole.  The lifer with whom we wanted to work was incarcerated in 1953 at the age of 15. There seemed to be no way we could obtain contemporary images of the subjects, let alone track their changing appearances over time.  The idea of commissioning prison artists to draw the subjects did occur to me, but I dismissed it.  I believed that the lifers’ faces would be crucial to the impact their stories would have on viewers.

Recently, my students and I have considered working on video projects involving lifers.  Since the last time, however, I have learned about prison portraits.  In many prisons, it is possible for incarcerated persons to purchase, for $2.00 to $5.00 or so, a photograph of themselves alone or with others, usually family members or loved ones at the prison on visiting day.  These portraits are thought to be one of the most prevalent forms of vernacular photography in America.  They are usually taken against the backdrop of a benign outdoor scene (a waterfall, skyscraper, or majestic staircase) or abstract image that has been hand painted by residents of the facility.  The photographers are also among the incarcerated.  Polaroids have given way to digital images. (The reader can find more examples of prison portraits on the Internet.)  The subjects may keep the portraits, enclose them with letters or greeting cards, or give them to visitors to mark the occasion.  I even have a portrait of myself with two members of Lifers Incorporated at SCI Graterford which is located less than an hour from Philadelphia.  It was taken when I was at the prison for a special event sponsored by the group.

Prison portraits are subject to various interpretations.  Nicole Fleetwood, a young black scholar at Rutgers University (New Brunswick), offers a reading in an essay in Public Culture entitled “Posing in Prison: Family Photographs, Emotional Labor, and Carceral Intimacy.”  The piece is illustrated with numerous examples in which she and/or other relatives (her aunts, uncle, mother, grandmother, and grandcousins) pose with two of her cousins who were incarcerated.   According to Fleetwood, prison portraits “are crucial modes of self-representation” that are alternatives to the typical visual “indexing [of] the criminal,” i.e., mug shots and prisoner IDs.   The photographs “serve a normalizing function legitimizing intimate bonds and familial attachments among criminalized populations.”  Yet at the same time, they also mark a “family narrative of crises, disruption, structural inequality, dreams deferred, anticipation of a future moment, a temporal coming together under the strictures of carcerality.”  Although women bear most of the responsibility for maintaining connections with male and female relations in prison, what outsiders may not see, but what is reflected in the portraits, writes Fleetwood, is “the emotional investment of incarcerated men to stay involved and connect with family and loved ones on the outside.” They do this “through letter writing, sending art, having photographs taken, and demonstrating an emotional attentiveness not commonly expressed outside of the carceral structures.”

Fleetwood’s analysis suggests how much these photos must mean to a population lost in an image desert that is all the more extreme and anomalous given the ubiquity of the cellphone camera in the world beyond.  Prison portraits are the equivalent of “selfies,” which NPR Reporter Ryan Kailath describes as a means by which the unseen make themselves seen in just the way they want to be seen.  With the subjects smiling or serious, looking good for the camera, appearing trustworthy, serene, and a bit vulnerable, against a background of what prison portrait curator David Alder calls “tokens of middle-class life, like beach scenes that [they] will never ever have access to,” the portraits offer a reminder that “even people in prison have their good moments,” and suggest that “the interest in public safety is not well served by the continuing demonization of [our] prison population,” to quote Angus Love of the Institutional Law Project.

California recently lifted a 25-year ban on prison portraits imposed on residents confined in solitary confinement or security units, many for decades at a time.  As described by the Center for Investigative Reporting, the residents complained that during that time they lost the sense of their own identities; deprived of both photographs and mirror, they forgot what they looked like.  “For families, the photos are vital keepsakes. For prisoners, they carry an urgent plea: ‘Don’t forget about me!’” Without the photos, the families did forget.  “Sweeping restrictions [like the portrait ban] strained already-precarious relations” between the unseen residents and their folks on the outside.

Prison portraits have been called art and the subjects who pose for them are engaging in the performance of self-representation.  Whether this characterization is true or not, the portraits do offer a different, more contextualized way of seeing incarcerated persons.  They not only provide more complex images of incarcerated people than those supplied by mug shots and mass media portrayals, but also suggest approaches or techniques for transforming and deconstructing the stereotypical mental images of incarcerated people that are stored in the mind’s eye and pop into our thoughts no matter how much we strive to repress them.

To assist their work, I believe that lawyers should be allowed to take photos of their clients and to have access to prison portraits of their clients and their kin.  Lawyers should be allowed to use them in connection with visual legal advocacy on the clients’ behalf.  Access to such images would offer a measure of empowerment to the subjects of prison portraits who are struggling to advocate for themselves through the politics of self-representation, a politics as widely practiced today as the selfie.