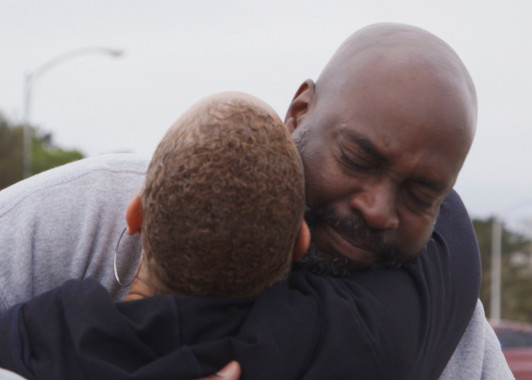 A Reunion from The Return

Whenever I see lawyers in a film, I pay close attention.  If the account is fictional and the lawyers are not real, I look to see if the filmmaker has gotten the details of legal procedure and practice right.  Given my focus on documentaries, most of the time the account I am watching is nonfictional and the lawyers and clients are being themselves, so I speculate as to the lawyers’ motives for involving themselves and their clients in such a production and whether they got what they hoped to achieve from the effort.  And so it was with “The Return.”

“The Return” is a uniquely personal vision of the social, emotional, and economic hurdles of prisoner reentry as encountered by lifers who never expected to be released.  In 2012, the voters of California passed the Three Strikes Reform Act of 2012 (Prop. 36) which mandates the resentencing of persons whose third strike or effective life sentence involved a crime that was neither serious nor violent if their release would not create “an unreasonable risk of danger to public safety.” Directed by Kelly Duane de la Vega and Katie Galloway and shot in vérité or observational mode, “The Return” is largely focused on two returnees, Kenneth Anderson and Bilal Kevin Chatman, as they attempt, with different degrees of success, to reconnect with family, find and hold onto low-paying jobs, and adjust to life on the outside after more than a decade of incarceration.

Because scarce prison resources are not “wasted” on lifers, Anderson returns to live with his former wife and children burdened by unresolved drug addiction issues, prison-induced PTSD, educational deficits, and psychological insecurities that force him to retreat to a facility and restart his reentry effort.  He was fortunate in that the proponents of Prop. 36 had worked to identify resources capable of providing the support necessary to allow returnees to get out and stay out of prison.  Bilal recognizes that he is being given opportunities he never had during prior periods of prison reentry when he never really had “a chance of making it.”  As explained by attorney Michael Romano, a Three Strikes Law specialist, “We are at the very beginning of turning the corner on mass incarceration and the people being freed under Proposition 36 are a tiny sliver, a tiny piece at the top of that mountain.  So it is imperative for us, on many different levels, that they succeed.” 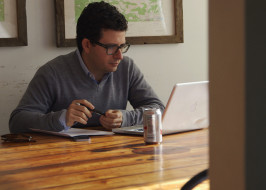 Michael Romano, Esq. from The ReturnBeyond the returnees, lawyers are significant subjects of “The Return.”   Chief among them is Romano who is the Director of Stanford Law School’s Three Strikes Project, which has since been renamed the “Stanford Justice Advocacy Project.”  I recently spoke with him about the documentary.

Over the course of the effort to end the injustices of the Three Strikes law, Romano occupied numerous roles.  He was initially a criminal defense litigator who took advantage of the discretion available under the law to free individual defendants; then a referendum drafter and advocate, along with Stanford Professor of Practice David Mills, the official proponent of the measure; a litigator for individual Prop. 36 petitioners but one also concerned with the reentry services available to his clients; and finally a subject in an advocacy documentary.  (You can find a fuller account of the passage and implementation of Proposition 36 in an article co-authored by Romano and Mills and published in the Federal Sentencing Reporter in April 2013).

Video has become an integral component of criminal justice reform campaigns whether the aim is to impact the outcome of judicial decision making, legislative or bureaucratic action, or popular referenda.  It was used in the political campaign to reform the Three Strikes law.  The directors de la Vega and Galloway produced several short videos that can be found on the website of “The Return.”  Shifting from Prop. 36 advocates to journalists and documentary filmmakers, they pitched the idea to campaign funders of doing a feature-length film with new principal subjects, one of whom they met when visiting prisons and the other of whom was a client of a public defender.

Going into the documentary project, Romano knew the filmmakers well, but had no idea of how the film would help the cause.  He believes that it has been useful with regard to the broad message opposing mass incarceration, particularly long sentences.  The film has been screened for decisionmakers in Washington, D.C., advocacy organizations, and persons presently in prison.  Romano believes that the general public is more sympathetic than might be expected.  Advocacy groups get lost in the data.  Pollsters indicated that the financial argument (that the cost of incarceration exceeds the benefit derived from imprisoning nonviolent offenders guilty of non-serious crimes) was not as powerful as anticipated.  It did not move anyone like an intense focus on the lives of one or two prisoners and their families.  Romano says that the film “humanizes” people who are in prison or who have just been released.  The film will live on and change perspectives about who is incarcerated and why.

The idea that a documentary’s treatment of “outsider” subjects is humanizing counts as more than a cliché with regard to “The Return.”  Unlike some documentaries following prison returnees, there is no posturing, fronting or fakery in “The Return.”  We see Kenneth Anderson struggling with basic high school math and we recognize his bewilderment when he goes to a community college to register for a course in person only to be told that he must do it online.  When he loses his job and lapses in his recovery, we suspect the reasons why. 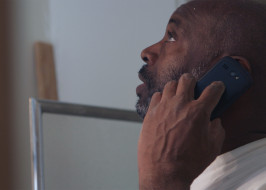 Kenneth Anderson from The Return

Though the filmmakers congratulate the California electorate for shortening the sentences “of currently incarcerated persons” “for the first time in history,” the viewers of their documentary should come to appreciate the damage done by long, needless, and undeserved incarceration and recognize that the Prop. 36 vote was really the first step in righting a public wrong.  As Romano says in the film, “We as a society have to take responsibility for what we have done and try to fix it.”  Hearing and, better yet, seeing the stories of the returnees as they unfold should invoke empathy and guilt; “The Return” humanizes its viewers. 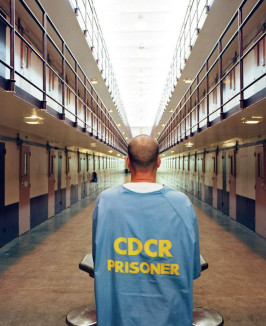 Cellblock from The ReturnThe risk of recidivism is a concern for proponents of any reform involving sentence reductions and releases.  I held my breath though much of “The Return” waiting for one of the men to engage in illegal or prohibited behavior that would land him back in prison.  I asked Romano about that.  He said that personally he honestly cared that someone he helped might hurt someone in a bad way.  From a political perspective, he worried that “a headline crime” might adversely impact other deserving potential returnees.  There have been no “headline crimes.”  The rate of recidivism for the Third-Strike returnees is under 10%, much less than the 60% rate experienced by the general reentry population.  Indeed, according to Romano, polls indicate that voters are not as influenced by the negative horror stories, the “Willie Horton” scenario, as feared.

In the film we see Romano discussing reentry services with providers and visiting a farm with his co-counsel to check on the progress of a client whose reentry program was located there.  Is this typical work for a criminal defense lawyer?  Romano indicated that he surveyed halfway houses and homeless shelters on a small scale before the campaign began and thereafter.  He had to consider where it would be best for a person to go and how he or she would get there.   Getting a good handle on reentry services was “extraordinarily difficult.”  “The data that residential reentry facilities help in the long-run is pretty thin. “  Lawyers are not reentry experts.  “Reentry support is a profession;” that is one of the things the documentary shows.  The campaign extended to seeking funding from Sacramento.  The lawyers at the Project also established a program to provide returnees with rides between prison and their reentry facilities that was written up in the New York Times Magazine.  A follow-up story indicates that it has since been extended to provide transportation for federal prisoners released under President Obama’s executive clemency program.

The media attention has taught Romano to be cautious.  Exposure can be “overwhelmingly positive if it influences cases.’’ “The general public is on your side if they get to see what is really going one – beyond the data and the money, the things that lawyers control and understand,” that is to say “once the public is able to see the human side of the criminal justice system.”  Romano continues, “It is a lot of work to have a film crew following you around.  It is best to work with people you know and trust.” After the story in the Times Magazine, the Project fielded a number of requests especially with regard to the reentry work.  Extraordinary caution is required, especially with regard to clients who have been in prison for a long time.  “It can be extraordinarily damaging to have a camera in your face.”  Kenneth had a relationship with the directors that was built prior to his release.  They were not “foreign media.”  They were journalists who wanted to do a longer story, not a news crews after a 2-3 minute piece.  Romano, who was himself a subject of the film, suggests, “Put yourself in the position of the client. .  . . You never forget that the camera is there.”

Campaigns to reduce mass incarceration by reducing harsh, counterproductive, and costly sentences are being waged throughout the country.  For example, the Penn Program on Documentaries & the Law, which I direct, is working on efforts in Pennsylvania to increase medical releases for terminally and seriously ill prisoners and commutations that will make some persons sentenced to life without the possibility of parole eligible for release.  The success of such challenges depends on citizens not only understanding the harm that unfair sentences have done to individuals, families, and communities, but also accepting the need to devote resources to assure the quantity and quality of reentry services returnees need.  These imperatives must be part of the concerns of all constituencies engaged in the struggle, lawyers included.  These are the lessons of I learned from “The Return” and my conversation with Michael Romano.