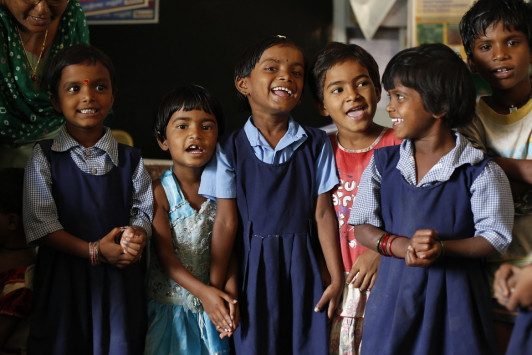 Speaking at Harvard University earlier this year, Irina Bokova, the current Director General of UNESCO defined girl’s education as a justice issue. In her words: “We will do justice to the world by promoting girls’ education as the single most powerful transformational force to improve lives and societies.”

Girls’ education as a justice issue expands the notion of the right to education and invokes the right to education as a justiciable right. This new definition of education as justice provides a fresh lens to analyze the current war against girl’s education.
UNESCO has documented attacks on schools in at least 70 different countries between 2009 and 2014, with many of the attacks specifically targeting girls, parents, and teachers supporting gender equality in education. In many communities, deeply-rooted gender stereotypes, and discrimination often result in girls left behind education. These inequalities are compounded in conflict situations, when girls are at greater risk of missing out on school permanently.

From Malala to the girls of Chibok in Nigeria, in many parts of the world, there is a war being waged against girls’ education. Malala’s intrepid support of girls’ rights to education made her a target of a violent attack from the Taliban in Pakistan. Malala remains a powerful symbol of girls whose lives are under attack for attending school, but thousands of other girls are threatened daily for their temerity in attending school.  As Malala in her famous blog wrote about the destruction of girls’ schools: “Five more schools have been destroyed one of them was near my house. I am quite surprised, because these schools were closed so why did they also need to be destroyed?”
In Afghanistan school wells have been poisoned by extremists who are opposed to girls’ education, and girls traveling to school in Afghanistan and Pakistan are subject to acid attacks. In Mali, young girls are forced into marriage, recruited by militia, and barred from going to school. While the Lords’ Resistance Army targeted secondary school girls in northern Uganda, girls going to school are been abducted and forcibly recruited by ISIS. These girls are in the frontlines of armed conflicts with classrooms and schools as the battlegrounds. The widespread and systematic way of blocking girls access to school amounts to a tactic of terror and compounds parents’ fear of sending their daughters to school, and girls become the target of attack by violent extremists, and a symbol of danger in communities in conflict.
The then UN Special Representative on Sexual Violence in Conflict, Margot Wallström, in February 2012 said that “It has become more dangerous to be a woman fetching water or collecting firewood than a fighter on the frontline.” Similarly, it has become more dangerous for girls to go to school in certain parts of the world than to be a fighter on the frontline.

The UN Convention on the Elimination of Discrimination against Women (CEDAW) in Article 10 calls upon “States Parties to take all appropriate measures to eliminate discrimination against women in order to ensure to them equal rights with men in the field of education and in particular to ensure, on a basis of equality of men and women.”
Although this provision can be interpreted expansively to cover gender-based violence in schools, it does not go far enough to cover violence against girls’ education as a tactic of terror.

Since 2000, international law has recognized both the gender specific impact of conflict and the central part women play in building peace and resolving conflict. Security Council Resolution 1325 (2000) called on member states to increase the participation of women in the “prevention and resolution of conflicts” and in the “maintenance and promotion of peace and security.” It called upon parties involved in armed conflict to abide by international laws that protect the rights of civilian women and girls and to incorporate policies and procedures that protect women from gender-based crimes such as rape and sexual assault. Moreover, Security Council Resolution 1820 (2008) called for an end to the use of sexual violence against women and girls as a tactic of war and an end to impunity of the perpetrators.

To date, eight Security Council Resolutions (UNSCR) have been adopted, but no UNSCR addresses attacks on girl’s education directly. Given that attacks against girls’ education has become a strategic weapon of war, it is important to adopt a UNSCR that addresses attacks against girls’ education a tool of terror.  More recently, Ban Ki Moon, the UN Secretary General, has spoken out on the use of sexual violence by ISIS, Boko Haram and other extremist group as a tactic of terrorism. The Secretary General’s Special Representative on Sexual Violence in Conflict and Under Secretary General Zainab Bangura stated before the Security Council in June 2016: “When we think terrorism we think of destruction of property, killing, bombing or hostage taking. But we cannot deplore the public violence of terrorism while ignoring the violence terrorists inflict on women and girls behind closed doors.”

Her latest report to the Security Council in June this year, redefines sexual violence as a “tactic of terror” and highlights the crimes committed by non-State actors such as ISIS, Boko Haram and Al-Shaabab, including abducting, raping, and selling into slavery women and girls.

Her impassioned appeal brings to life the plight of young girls, a majority of them school girls, traded like goods in the market place. “Today, as we deliberate here, women are being traded in an open slave bazaar in Raqqa; Price-lists exist to regulate their sale, like livestock at a farmers’ market… This is part of the message thread under a photograph of a girl painted with bright red lipstick. She cannot be older than 12 years.”

As a final plea, Under Secretary General Zainab Bangura reminds the Security Council that the international normative framework, including the resolutions of the Security Council, must keep pace with the changing global security context. She adds that it must take note of the “new dimensions of sexual violence deployed as a tactic of terrorism” and that “counter-terrorism strategies can no longer be decoupled from efforts to protect and empower women and girls ….”

It is important to build on this argument that sexual violence is not only a weapon of war as defined by the Rome Statute to the International Criminal Court, but a tactic of terror. Under Secretary General Bangura’s recommendation to the Security Council that it stays abreast of the changing security landscape, must be extended to argue for a new Security Council Resolution that addresses attacks against girls’ education as a tactic of terrorism. Often there is a correlation between the denial of girls’ education and sexual violence in conflict.  At the same time, counter-terrorism strategies will be effective only if they complement gender equality, and attacks on schools and girls attending schools are considered attacks against humanity.


This blog post is dedicated to Irina Bokova, Zainab Bangura and Moushira Khattab, three women who have redefined girls’ education. Irina Bokova is the Director General of UNESCO, Zainab Bangura is the Under Secretary of the United Nations and the Special Representative of the Secretary General on Sexual Violence in Conflict and Moushira Khattab led the struggle against FGM and child marriage as a Minister of Family and Population in Egypt.