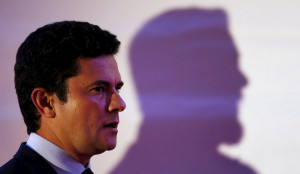 The original article in Brazilian can be found here: http://184.107.78.53/noticia/nos-estados-unidos-moro-so-vai-decidir-se-torna-lula-reu-na-semana-que-vem

Jornal GGN – Sergio Moro should only analyze the allegations of the Federal Public Ministry (MPF) against former President Lula, the first in the scope of the Lava Jato (“Car Wash”) investigation, next week. This is because the federal judge is in the United States this week, participating in a judicial leadership symposium at the University of Pennsylvania.

The symposium is called “Producing Leaders of Character and Integrity,” and Moro, according to Folha, is the keynote speaker. On the event website, he is described as a judge of “national fame” who has “emerged as a major Brazilian leader.”

“Judge Moro’s commitment to the rule of law and fighting corruption has made him a testament to the power of leading with character and integrity,” declared Professor Claire Finkelstein, one of the event’s coordinators, in publicity materials.

Yesterday, the MPF accused former President Lula of corruption and money laundering in the case of the triplex apartment in Guarujá. He was also indicated, in media presentations, as the overall leader of the corruption scheme in the federal government.

Attorneys have declined to bring forward a request to Moro for a precautionary arrest. They said that it is standard in the MPF not to comment on this type of action.