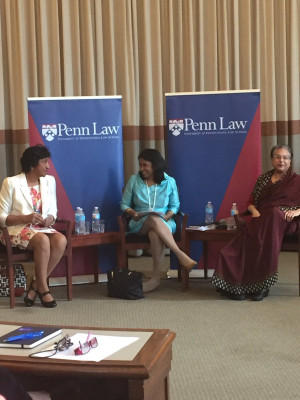 Dean de Silva de Alwis introduced the pair as “two of the greatest women human rights defenders of our age […], the embodiment of the magnificent edifice of the human rights framework and agenda.” She noted that this event marks a transformative moment in the global engagement of Penn Law, with the recent opening of Perry World House, and vastly deepened programming at the law school that seeks to address the greatest global challenges of our time.

The law school had the privilege of hosting Jilani during the Fall of 2016 as a visiting Bok professor, when she taught a course on the right to defend human rights. She highlighted to her students the importance of examining the human rights discourse through an intersectional lens by inter alia interrogating the special challenges facing human rights advocates who are women, who are low-income, who are racial minorities, who have disabilities, and who reside in conflict zones. No stranger to the grave dangers facing women who challenge the status quo in the furtherance of human rights, Jilani said her law office still bears the bullet holes of a client’s uncle who had conspired with his sister to kill the client for seeking a divorce.

In response to a question about how gender made a difference in her experience as a human rights defender, Pillay referred to her experience in Apartheid South Africa, where she was the first non-white woman to start a law firm in her province: “No political groups in the Apartheid era wanted to address women’s rights. They said, ‘liberation first.’” Pillay also noted the significant degree of activism involved in formulating a commonly accepted definition of rape and sexual violence under international law. Jilani shared many of the challenges Pillay faced in operating as a woman human rights defender; she started the first all-women law firm in Pakistan. “Women have a place in the public domain, and we are here to stay.” Jilani noted that out of five UN High Commissioners for Human Rights, three have been women, and these women have left an indelible mark, highlighting the contributions of women to helping the UN achieve its goals.

Jilani emphasized the importance of putting a human face on human rights violations: “it was not enough to raise your voice against a particular law, but to bring the face of the victim before the institutions that are supposed to protect them.” She also noted the critical role of context in achieving human rights through the law, stating that in many countries, the rule of law as enforced is antithetical to women’s rights and human rights, especially when the independence of the judiciary is questionable. “Human rights cannot be promoted without a full understanding of the political context” in which activists seek to realize these rights.

The reflections Jilani and Pillay offered drove home the sense that Penn Law’s legal minds can make great contributions to global human rights advocacy, so long as they continue to leverage their resources, think in transformative ways, and seek to elevate the voices of those they represent.