Report Back From Tijuana: How DHS’s “Remain in Mexico” Plan Will Worsen an Already Untenable Situation for Asylum-seekers at the Border

Maggie Kopel, Shaunee Morgan, and Emma Morgenstern are JD Candidates at the University of Pennsylvania Law School and former students with the Transnational Legal Clinic.

The irony wasn’t lost on us: traveling to Tijuana as the President shut down the government over a demand to close the southern border. We, a group of seven law students and three professors, knew we would be entering a volatile situation in Tijuana to volunteer with Al Otro Lado’s Border Rights Project. We spent five days in the city, both offering information about a complex system to the people entering it and bearing witness to increasingly senseless and inhumane processes.

The current dynamics in Tijuana manifest both the internal U.S. struggle over “illegal” immigration and the tense geopolitics between the U.S. and Mexican governments over “security” at the border. Each morning, during our time with Al Otro Lado, we visited El Chaparral port of entry to conduct outreach to asylum-seekers attempting to navigate the chaotic world of “the list.” Whereas international and U.S. law allow individuals seeking asylum to immediately present themselves to immigration officials, asylum-seekers in Tijuana have to place themselves on a list. This list is purportedly run by the asylum-seekers themselves, but, from what we witnessed, is endorsed and supported by Mexican and U.S. officials. Asylum-seekers wait for months until their number is called. On any given day, the asylum-seekers have no idea how many numbers would be called or how much longer they would have to wait in Tijuana. 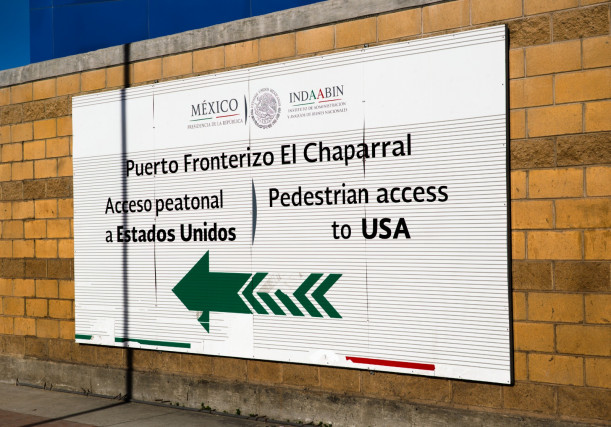 Sign posted at “El Chaparral,” the port of entry where asylum-seekers line up to collect a number and are processed by U.S officials. Credit: John Peng

Towards the end of our trip, the U.S. government initiated the “Remain in Mexico” plan, wherein the majority of asylum-seekers crossing from El Chaparral will, after presenting themselves to U.S. immigration officials, be given a Notice to Appear in immigration court. They will then be forced to remain in Mexico until their court date, instead of waiting in the U.S., as is required by law. Immigration attorneys and advocates are rightfully concerned that the skeletal details of the plan will add insurmountable obstacles and confusion to an already inaccessible process and serve as further proof of the current administration’s overall strategy to add excessive bureaucratic barriers to deter asylum-seekers.

The “Remain in Mexico” plan would add to the current congestion and instability in Tijuana caused by the illegal list system. Shelters have become dangerous and overcrowded; some have been closed due to inhumane living conditions. The proposed policy is silent on where exactly individuals will stay in Mexico while awaiting their asylum case and who, if anyone, will hold the Mexican and U.S. governments accountable for the conditions in which they remain. This policy will invariably serve to compound a humanitarian crisis. 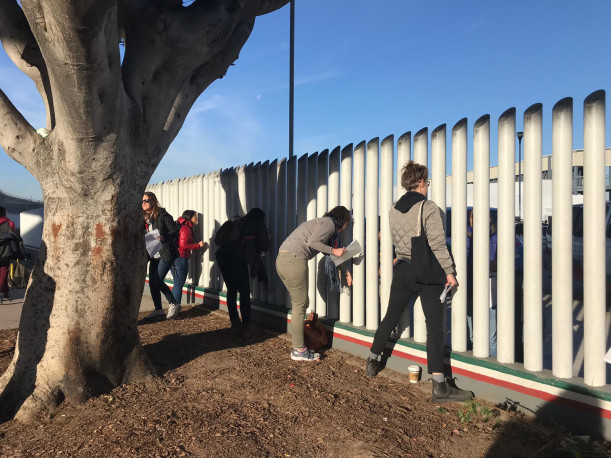 Volunteer attorneys providing last minute advice to asylum-seekers who were lined up behind a fence to be processed by U.S officials. Credit: Maggie Kopel

Migrants are not afforded many rights within our immigration system, but they are guaranteed some; including, critically, the right to independently obtain counsel throughout the entire process. By forcing asylum-seekers to remain in Mexico, the government has created a logistical barrier that undermines this right. Individuals forced back to Mexico might be limited to those lawyers and law students like us volunteering briefly in Tijuana, or to working remotely with lawyers across the U.S. We met many excellent immigration attorneys during our trip. However, no attorney could prepare thorough asylum applications with limited resources on the ground in Tijuana or with limited client contact from the U.S.

Every afternoon during our time with Al Otro Lado, we would conduct individual consultations assessing asylum-seekers’ claims and responding to the growing confusion about what the new policy might mean to them. Where would they stay in Mexico while they waited? For how long? Who would protect them if their persecutors tracked them down? This plan offers no answers to these questions, or to the many others that preoccupied the people with whom we met. This confusion also disrupted the information we were able to provide about either legal standards, or about practical considerations, such as wondering if “the list” will disappear now that everyone will be required to remain in Mexico.

This increased confusion will undoubtedly exacerbate the vulnerability asylum-seekers are facing in Tijuana. We met many people grappling with impossible choices like whether to wait “their turn” for months in a risky, uncertain, and possibly fatal situation or attempt to make the dangerous and expensive crossing outside of an official port of entry and take their chances with border police.

The Department of Homeland Security claims the “Remain in Mexico” policy will restore order to its immigration processes and ensure that vulnerable populations receive the protections they need. However, concentrating high numbers of vulnerable individuals in already under-resourced shelters will only grow the humanitarian crisis, and further complicate and slow the asylum process, deepening the U.S. government’s disorderly management of the immigration process. DHS’s rationale is out of step with what it has proposed: a policy fundamentally based on ambivalence towards human suffering and continued hostility toward immigrants. 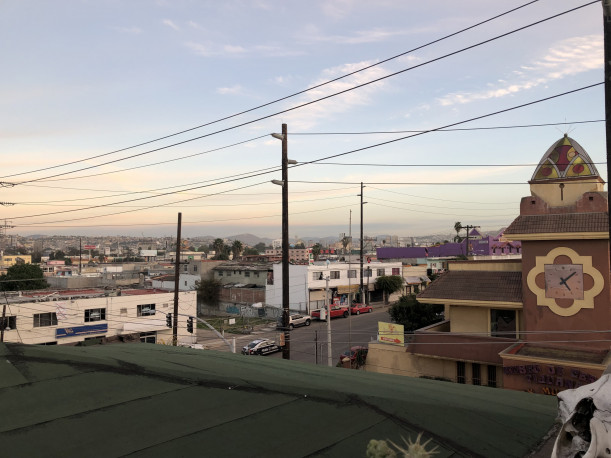