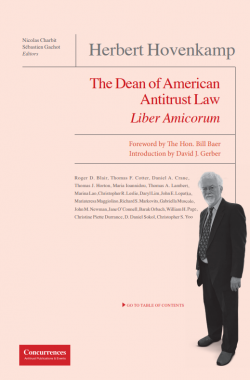 The collection is structured in the traditional European Liber Amicorum, or Festschrift, which celebrates and honors an individual’s life and work through the eyes of peers, colleagues, and former students, and features contributions that address areas of Hovenkamp’s scholarship: antitrust reform, the role of economics in antitrust law and innovation, and intellectual property.

“Finding enough superlatives to describe my colleague, Herbert Hovenkamp, is a nearly impossible task,” writes Yoo. “Recognized as ‘the dean of American antitrust law’ by the New York Times, even scholars critical of Hovenkamp’s conclusions recognized him as ‘the most influential antitrust scholar of our generation.’ Studies confirm that he is cited more often in both academic commentary and judicial opinions than any other antitrust scholar by a wide margin. In short, as Daniel Crane notes, ‘Hovenkamp speaks with oracle-like authority on antitrust matters.’”

The book features a foreword written by by the Hon. Bill Baer of the Brookings Institution as well as an introduction by Professor David J. Gerber, Chicago-Kent University.

“In all his work, Herb presents the issue fairly, incorporates economic principles in a manner understandable to lawyers, summarizes the caselaw and then, most importantly, critiques it,” writes Baer. “He shows us where courts have gone astray, what industrial organization economics can teach us and how to get antitrust jurisprudence back on a coherent, predictable, and productive path. It is a rare antitrust opinion that does not cite his work.”

Herbert Hovenkamp, The Dean of American Antitrust Law Liber Amicorum was made widely available on July 7 via Concurrences.