Since childhood, Ezekiel Edwards L’02 has had a deep interest in criminal and racial justice. He came to the University of Pennsylvania Carey Law School after spending several years working as an investigator for people facing the death penalty. This indelible experience helped him decide to pursue a career that would allow him to advocate on behalf of those accused of crimes. 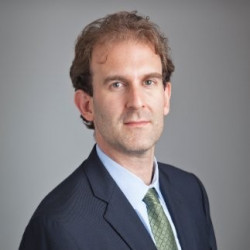 At the Law School, Edwards said he was “fortunate to learn from fantastic and inspiring professors, including Seth Kreimer, David Rudovsky, Regina Austin, and Wendell Pritchett.” He also benefited from the Law School’s experiential offerings by participating in the Criminal Defense Clinic and interning with the Federal Defender’s Capital Habeas Corpus Unit.

After graduating, Edwards spent time working directly with clients as a public defender at the Bronx Defenders. He next became a staff attorney at the Innocence Project, and then shifted his focus towards implementing a broader vision for reform as a criminal justice fellow at the Drum Major Institute for Public Policy, the civil rights organization founded by Martin Luther King, Jr. In 2010, Edwards joined the ACLU, where he is now the Director of its Criminal Law Reform Project (CLRP) in New York.

“The Criminal Law Reform Project seeks to end excessively harsh crime policies that result in mass incarceration and stand in the way of our achieving a just, equal, and humane society,” Edwards said. CLRP’s goals are “to reduce the number of people entering the criminal punishment system and end the disproportionate harm that the system causes to Black and brown people.” Working closely with the ACLU’s National Political Advocacy Department, CLRP is engaged in movement-building directed towards promoting social change, racial justice, and winning the state-based reforms needed to drastically reduce the size of the nation’s incarcerated population.

Passionate about his work and inspired by the communities he serves, Edwards reflected that “although our behemoth criminal legal system has been decimating lives for decades, because of tireless advocacy by directly impacted communities, there has recently been significant public reckoning with the harms of mass incarceration.” Edwards has been heartened to see more Americans beginning to understand “the longstanding reality of violent policing in communities of color” and “the wrongheadedness and racism” of the war on drugs.

Edwards fondly recalled Penn Law as a place that prepared him for the work he is doing today by “providing a demanding – yet collegial – environment.” As a student, he was also a recipient a public interest scholarship, “for which,” he noted, “I remain deeply appreciative.”

While he has always felt a strong sense of purpose in his work, Edwards said that now is a particularly exciting time to be working on criminal justice. Galvanized by grassroots movements across the country and the advent of social media as a tool for raising awareness about incidents of racist police brutality, many people are waking up to the problems that have been motivating Edwards for years.

“There is momentum now on our priority issues,” he said, “that we have not seen in decades.”

This feature is part of a series Penn Law Journal has collected about alums who work hard to fight for Civil Rights in our communities. More information about alumni events and programming can be found on the Penn Alumni homepage.