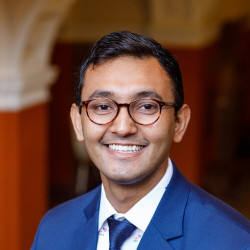 The question presented to 2L and 3L students at Pennsylvania law schools was, “Why Should Pennsylvania Focus on Increasing Diversity in its State Appellate Court Judiciary?”

In his winning essay, Vidyarthi focused on the importance of those for whom legal rights “are the most meaningful,” who “often get no chance to offer their diverse interpretation of those rights.”

“It is these people,” writes Vidyarthi, “whose voices must be heard.”

State courts, he argues, are especially important in this discussion “given that state courts are where most people will first encounter the legal system, and where many issues of liberty and justice are resolved, especially for criminal defendants.” Vidyarthi emphasizes that without adequate diversity, the legal system fails to protect many people.

His personal background further influenced the development of his essay.

“Diversity matters a lot to me,” said Vidyarthi, “both because I’m a South Asian and international student in a profession where we are underrepresented – and need that representation given recurring issues of hate crimes, police brutality, and immigration – and because I have a science background, which I think is increasingly for broad legal issues beyond intellectual property, such as climate change, internet/technology law, healthcare, and biological issues.”

Vidyarthi, who is a native of New Delhi, India, holds a BS in Nuclear Engineering and BA in Applied Math from University of California-Berkeley and an MS in Engineering and Technology Innovation Management from Carnegie Mellon University.