The University of Pennsylvania Carey Law School prides itself in offering students a wealth of opportunities to tailor their educational experiences toward their unique professional goals and academic curiosities. When the COVID-19 pandemic halted international travel, the Law School collaborated with its partner universities overseas to migrate the global experience into the virtual world.

Between the Hebrew University of Jerusalem (HUJI) and Hong Kong University (HKU), Law School students had the choice of 16 different global courses. The courses spanned a broad range of topics, including International Criminal Law, Comparative Property Law, and Law of the Sea. 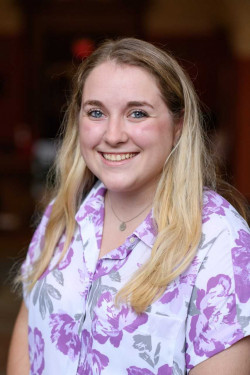 Cassandra Dula L'21Cassandra Dula L’21 elected to study International Environmental Law at HKU, due in large part to her plans to work at an international firm after graduation. In the course, Dula logged into a classroom that included students from China, Hong Kong, and Europe. Lectures included both academic discussion and what Dula described as “real-world examples” of the application of international environmental treaties. For her, the course offered the chance to learn more about how international law works more broadly, which she said will be invaluable to her throughout her career.

“It’s hard to know what options are in the international space unless you’ve taken a class to see who the actors are and what their roles involve,” Dula said. “It’s been really helpful to get to see if this is an area of law where I can see myself working in the future, as well as where it intersects with other areas of interest.”

Having arrived at the Law School with a background and interest in Israeli law and policy, Andrew Figueiredo L’22 was particularly excited to see that HUJI was offering an Introduction to Israeli Law course. Figueiredo took the course with the intention of building upon the knowledge he already had as an activist and scholar.

“I’ve had an interest in Israeli law and Israeli policy for a while now,” Figueiredo said. “Penn being able to give me this opportunity to work something about Israeli law into my curriculum alongside my other courses was really helpful in allowing me to deepen my knowledge and to interact with the top professor in Israel.”

Though global courses usually, obviously, require travel, both Dula and Figueredo commented on the convenience of taking global courses virtually. Dula had always been interested in participating in Penn’s global learning programs, but as a dual degree student, she knew it would be difficult. When Penn announced the virtual Global Online Courses, Dula jumped at the chance to enroll. Figueiredo, by contrast, had not given much thought to international courses prior to COVID, as there were so many classes at the Law School at Penn that he was excited and eager to take; however, when the Law School announced the virtual format of its Global courses, he found that they fit neatly into his already-packed schedule.

Andrew Figueiredo L’22“I had picked up a decent number of credits this semester, but I realized that I still had a little bit of time. I wanted something that was a one-credit class – something really interesting. Then all the sudden, this popped up,” he said. “Bringing the international experience to my living room really let me learn so much that I didn’t think I’d be learning this year, so it was a welcome surprise and a welcome addition to my semester.”

Virtual or not, global courses offer students the valuable opportunity to hear and learn from a diverse array of perspectives. Figueiredo explained that his course included regular break-out rooms wherein students would compare and contrast how certain legal traditions functioned in their respective countries. For him, an important takeaway from the course has been the importance of understanding the cultural context in which different legal systems are rooted.

“The course has given me an international horizon that will let me work with other legal systems and with companies in other countries too because it highlights for me how important it is to know the context of each legal system,” Figueiredo said. “Once you know that, I think it opens a lot of doors for cooperation and collaboration.”

Dula also emphasized the importance of cultural awareness in occupying space within an international classroom. For Dula, there was inherent value in being in a room wherein her perspective as a white, predominantly Western-educated law student, constituted a minority view.

“Most of the students in the class were either from Hong Kong or mainland China, so most of the discussions on the international legal system were coming from a Hong Kong or mainland China perspective, which are both very different from the U.S. perspective,” Dula said. “Given that the U.S. has largely been the author of international law, talking about it through the perspective of people who it has mainly been thrust upon was, I thought, important and interesting, especially because I plan on working in the international law space.”