In recognition of over 50 years as a champion of legal ethics, professional responsibility, and pro bono work, the American Bar Association will award Lawrence J. Fox C’65 L’68 the ABA Medal, the professional organization’s highest honor. 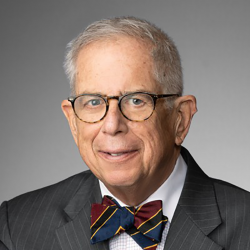 The ABA Medal recognizes exceptionally distinguished service by a lawyer or lawyers to American jurisprudence and is given only in years when the ABA Board of Governors determines a nominee has provided extraordinary service to the legal profession.

“As a practitioner, pro bono volunteer, law professor and national bar leader, Larry Fox has distinguished himself as one of the giants of the legal profession,” ABA President Patricia Lee Refo said. “In addition to his decades of service to the American Bar Association, Larry has been a leading voice on legal ethics and professional responsibility, has taught and mentored countless law students, and consistently done impactful pro bono work, particularly in the area of death-penalty representation. In more than a half century of legal work, Larry has exemplified the highest standards and ideals of the legal profession.”

The ABA also recognized Fox’s distinguished record of service to the association, which includes longtime membership in the House of Delegates and helping to launch the forerunner to ABA Day in D.C., the association’s annual grassroots lobbying event on Capitol Hill. Fox also has held top leadership posts of the Standing Committee on Ethics and Professional Responsibility, the Commission on the Evaluation of the Rules of Professional Conduct, the ABA Death Penalty Representation Project and the Section of Litigation.

Fox is recognized nationally as one of the most active ABA participants in contributing to issues relating to lawyer and judicial conduct and has taught professional responsibility for three decades, lectured at more than 35 law schools on the same topic and written or co-written eight books on professional responsibility with professor Susan Martyn. He is a longtime veteran of securities regulation and litigation matters and former partner at Drinker Biddle & Reath LLP before joining Schoeman Updike Kaufman & Gerber LLP in New York. He is also a fellow of the American College of Trial Lawyers and the American Bar Foundation and serves on multiple corporate boards of both for profit and not-for-profit entities.

“The ABA has allowed me to tackle a broad range of difficult issues and has given me many opportunities to contribute to the association and the profession,” Fox said. “My work with the ABA has been a pleasure at every level; it’s never been a job. I greatly appreciate the totally unexpected honor of the ABA Medal, and it’s even nicer when you get recognized for just having fun.”

Fox will receive the ABA Medal at the virtual General Assembly on Wednesday, Aug. 4 at 5 p.m. EDT, which is the opening day of the ABA 2021 Hybrid Annual Meeting. The meeting concludes on Aug. 10 at the end of the two-day House of Delegates meeting, which will be held both virtually and at the Hyatt Regency Chicago.